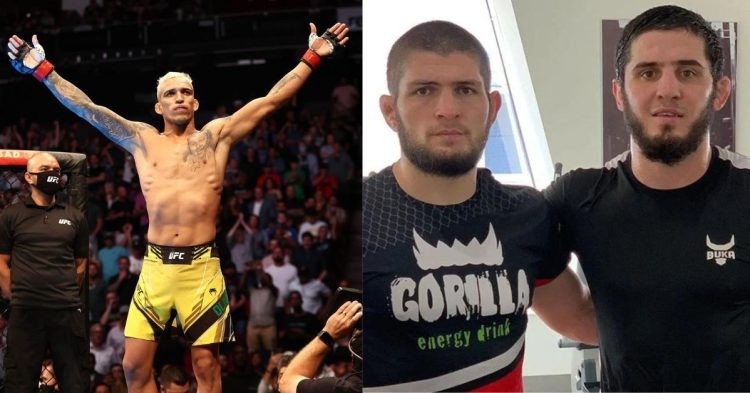 Former UFC lightweight champ Khabib Nurmagomedov recently took shots at Charles Oliveira ahead of the title fight at UFC 280 against Islam Makhachev. The main event is set to take place at the Etihad Arena in Abu Dhabi, on October 22nd.

However, Oliveira has proven them wrong and recently arrived in Abu Dhabi for next week’s highly anticipated title clash with Makhachev. Previously, it was said by Nurmagomedov that ‘do Bronx’ will not show up for the title fight.

Nurmagomedov also criticized Oliveira for his losses in UFC and implied that he doesn’t have a good ground game. The Russian’s intentions are pretty much clear that he is rooting for his protégé, Makhachev, but they have gone out of their way and are trying to get inside the head of the Brazilian.

“I just think Charles Oliveira will not show up in Abu Dhabi and the UFC will replace Charles with Beneil Dariush. Regardless of who the opponent will be, Makhachev is on his way to becoming the best in the world,” Nurmagomedov wrote in a post.

Recently, Makhachev posted on social media with captions: “2 weeks before the fight, Charles and his team not in Abu Dhabi yet… should I start worry?”

However, before leaving for UAE, Oliveira responded with a playful jab: “Calm down, dad is coming. Hello Abu Dhabi.”

Following the announcement of the fight, Nurmagomedov downplayed Oliveira’s skills and phenomenal achievements. They also insisted that after Oliveira fails to show up for the fight, Makhachev will face Beneil Dariush as a replacement fighter.

Meanwhile, Dariush recently stated that he would be the backup fighter for the UFC 280 main event fight if any of the fighters fail to show up at the last minute.

Charles Oliveira has sent a warning to Islam Makhachev and Khabib Nurmagomedov ahead of their highly anticipated lightweight title fight at UFC 280. The Brazilian has been overlooked by Makhachev and his team who said their arrogance will be Makhachev’s downfall on Oct 22.

‘do Bronx’ is riding an 11-fight win streak and will go up against Makhachev’s 10-fight win streak. Despite being the best submission artist in the history of the promotion, Oliveira has been ridiculed by Makhachev and stated that he will beat the Brazilian after dominating him throughout the fight.

Oliveira has phenomenal victories over Michael Chandler, Dustin Poirier, and Justin Gaethje. He also holds the record for the most submissions (16) and most finishes (19) in the UFC and is considered by many to be one of the greatest lightweights in the history of the sport.

On the other hand, Makhachev hasn’t fought the same level of competition as Oliveira. However, Makhachev trains with the former lightweight champ, Nurmagomedov.

The Dagestan fighter also has dominant wrestling and the finest Sambo in the sport, just like Khabib. The main event will happen in Abu Dhabi, which is the home turf for Makhachev. Hence, it will be an advantage for Makhachev as he will be cheered by Muslim fans.