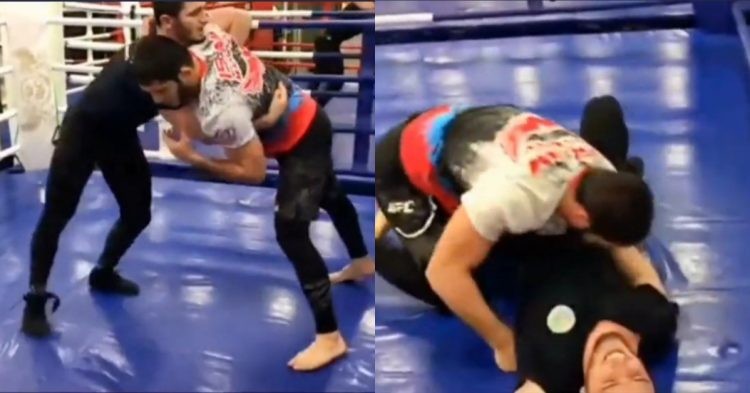 Islam Makhachev is fully immersed in his training camp for UFC 280. On October 22nd, he will face one of the most dangerous grapplers in the lightweight division, Charles Oliveira. This fight is especially big considering the fact that the winner will capture the vacant lightweight title. It looks like Makhachev is in peak form ahead of the title fight.

There has been a lot of speculation on how the fight is going to play out at UFC 280. While Oliveira is perhaps the most effective Brazilian Jiu-Jitsu practitioner in the UFC, there is a notion that Makhachev’s wrestling can be the perfect counter-weapon. Islam is the strongest fighter that Oliveira has come across in his career so far. On top of that, Islam’s wrestling skills are impeccable.

This is low key wild lol and I’m sure you could say I’m bias but this dude is an Olympic silver medalist.. not many people in the world can take him down https://t.co/NDfa8ccNz8

In a recently released video, Makhachev has shown why he is the favourite to win at the upcoming PPV. In preparation for his fight against Oliveira, the Dagestani fighter was seen wrestling with Magomedkhabib Kadimagomedov, who is an Olympic silver medalist. Proving his effectiveness, Makhachev could be seen taking Kadimagomedov down!

Islam Makhachev did not even break a sweat while taking down an Olympic-level wrestler. So Charles Oliveira, who is not known for his wrestling, seems to be in for a tough fight against the 31-year-old. Oliveira is not much of an obstacle when it comes to takedown defence. So it seems like the fight will mostly play out on the mat.

The video can be seen as a warning sign for Charles Oliveira. Although he has the most amount of submissions in the UFC, Charles does not have the best takedown defence in the UFC. He has a success rate of 57% while stuffing the takedown attempts. But it has to be pointed out that Oliveira does not mind being taken down as he does great work from his guard.

He is a master at sneaking in submissions when nobody sees them coming. However, he may not be able to do the same against Makhachev. Islam’s physical strength is much greater than Charles’. Hence, Do Bronx may not be as effective this time around. This latest video of Islam taking down Kadimagomedov has convinced the fans that it will be Islam who gets the submission in the main event of UFC 280.

Repeat: he beat Kyle fucking dake 11-0. This is insanely impressive

He’ll sub @CharlesDoBronxs in the first.

What are your thoughts on the matter? Do you think Islam Makhachev will be able to secure a submission against the former UFC champ? Let us know in the comments down below!