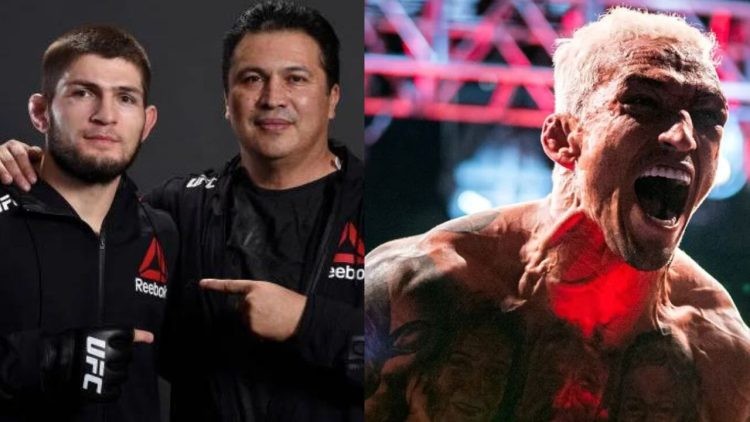 Charles Oliveira is a man on a mission ahead of UFC 280. Taking on Islam Makhachev, Oliveira will be hellbent on getting back the title that rightfully belongs to him.

Previously, Charles lost his lightweight title after failing to make the weight at UFC 274. Due to what many believe to be a faulty scale ahead of his UFC 274 bout with Justin Gaethje, ‘Do Bronx’ was stripped of his title.

Recently, Khabib Nurmagomedov made a bold claim regarding Oliveira for UFC 280. “I just think Charles Oliveira will not show up in Abu Dhabi and the UFC will replace Charles with Beneil Dariush.” Commenting on Khabib’s comment, coach Javier also had some things to say.

“No, I don’t know what Khabib’s doing but maybe Khabib is playing the mental game (laughs). I don’t know. All I know is this, we’re fighting for the title be it Charles or whoever the UFC puts in front of him (Islam).” For those who are not aware, Beneil Dariush is the replacement in case of an emergency on either side. “One thing you guys know, Khabib is fantastic at getting attention now these days. Him saying that is just like everyone else. They do their talking, Khabib does his talking too.”

For the most part, Khabib’s tweet makes it seem as though Charles is scared to face Islam. However, fans have since ridiculed the tweet with some even believing manager Ali Abdelaziz to have posted the tweet from Khabib’s account.

According to manager Javier Mendez, the team is ready for anything. Although they prefer a quick night, Islam will be good to go for five grueling rounds if necessary. Here Mendez adds, that Islam will also be up to fighting an overweight Oliveira if needed.

Mendez believes that come fight time, both fighters will be around the same weight, so it’s not an issue in his eyes. Even though the coach is aware that the final decision is not up to him, he knows that Islam is hungry for whoever they throw in the Octagon against him.

With the stakes higher than ever, Charles Oliveira will have to keep a strict check on his weight. Surprisingly, he is also the underdog and at a home ground disadvantage. Will Charles rise to the occasion despite all odds? Leave your predictions in the comments below.