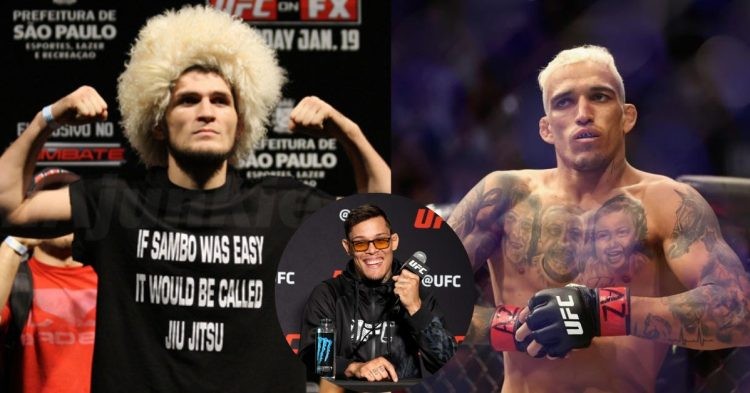 Charles Oliveira will step inside the octagon on October 22nd to take on Islam Makhachev in a five-round main event bout for the lightweight title of UFC 280. This title fight will take place at the Etihad Arena in Abu Dhabi, UAE.

With less than two weeks left for this fight, things are expected to get spiced up. As we inch closer to this fight, Do Bronx’s teammate Caio Borralho has taken a dig at Islam Makhachev’s training partner and former champion Khabib Nurmagomedov.

The former UFC champion had claimed many years ago that Jiu-Jitsu is easier than Sambo. Caio Borralho used The Eagle’s own catchphrase to troll him on Twitter and he went on to criticize all the Dagestani fighters’ poor Jiu-Jitsu skills.

The 29-year-old UFC contender is highly confident that his teammate Charles Oliveira will get the job done against Islam Makhachev at UFC 280. It is needless to say that the banter between the two camps is interesting to watch and we can hope for some intense trash talk as we edge closer to the PPV.

Throughout the build-up of the UFC 280 title fight between Charles Oliveira and Islam Makhachev, Khabib Nurmagomedov has been overly confident that his countryman will blow past the Brazilian fighter and become the new lightweight champion.

Islam and khabib are getting way too cocky it’s annoying

Fans are very unhappy with The Eagle’s comments and are consequently, criticizing his cocky behaviour on social media. Moreover, Khabib’s famous quote on his T-Shirt “If Sambo was easy, it would be called Jiu-Jitsu” has also come under the spotlight and fight enthusiasts have also shared their opinions.

Do let us know in the comments section below your prediction for this main event lightweight title bout between Charles Oliveira and Islam Makhachev that is set to take place two weeks from now.