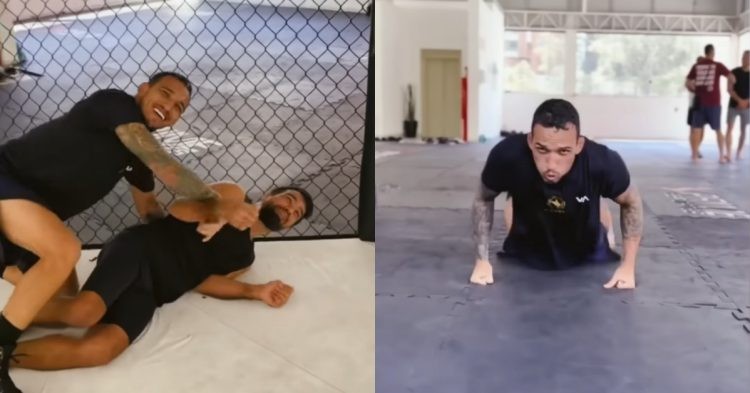 Charles Oliveira will have a second chance to regain his UFC lightweight title at UFC 280. After losing the belt on the scales at UFC 274, he will once again headline a PPV and this time, it will be against a top-ranked contender in the lightweight division, Islam Makhachev.

Islam has wreaked havoc in the division with his powerful wrestling. Many fans have claimed that Makhachev will run through Oliveira due to his strong ground game. Hence, Do Bronx is hard at work to improve his wrestling. Although Charles has the highest level of Brazilian Jiu-Jitsu, his wrestling still needs some work.

In a recently surfaced clip, the no. 1 contender could be seen practising his takedowns during his sparring session. There will be moments in the fight when Charles presses Islam against the cage and instead of trying to land strikes on him, it looks like Charles would want to take down the Dagestani fighter. The 32-year-old looked to be in good spirits for in the video and was having a lot of fun.

The fight between Islam Makhachev and Charles Oliveira promises to be an excellent contest on the mat. With Khabib Nurmagomedov in his corner, Islam’s grappling has been near flawless. On the other hand, Charles Oliveira has more submission wins than any other fighter in UFC history. So the clash of wrestling and BJJ is going to be fascinating.

Charles has the tendency to let the opponents come to him instead of looking for a takedown himself. But it has been very effective for him so far in his UFC career. Oliveira’s gameplan relies upon him doing the damage on the feet in a firefight, once his opponents attempt a takedown, Oliveira sneaks in a submission hold.

But Islam has no interest in exchanging on his feet. Much like the early days of his cousin Khabib, Makhachev looks to take down his opponents straight away. But, as his former teammate Josh Thompson pointed out earlier, the same approach will get him submitted by Oliveira. However, Islam begs to disagree.

“All these grappling guys, they know who grapples me. Like I grapple with ADCC champions. I don’t wanna say like all these guys’ names. (But) they know my grappling and its greatness level and they people know Oliveira never gonna submit me”

How do you see the fight playing out? Do you think Charles Olveira can submit Islam Makhachev? Let us know in the comments down below.