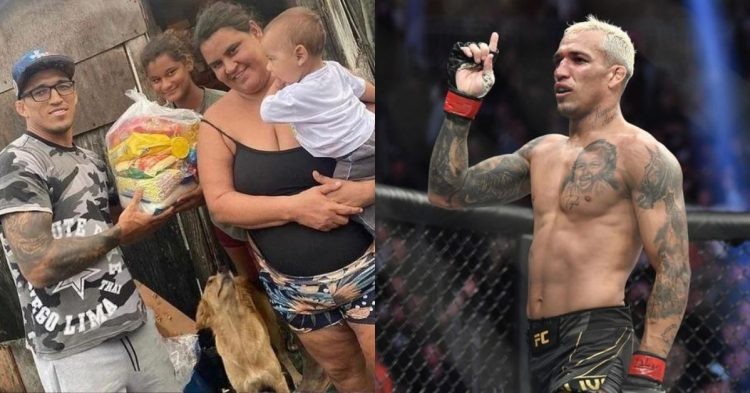 Charles Oliveira had a 28-fight trip to a UFC title opportunity that was the longest in the promotion’s history, included both high points and low points and spanned two weight divisions he has had an amazing legacy.

But in May of this year, he finally got his chance at UFC gold against Michael Chandler after racking up eight straight victories, the second-best run of his career.

Oliveira has obviously relished the privileges of being a UFC champion since leaving the slums. He is currently remodelling his previous home in the favelas. However, he is proud of his roots and has vowed to always remain a part of the neighbourhood.

In an interview with Brazilian MMA legends, he gave his insights on life growing up in a favela which was very profound. He mentioned in the interview how the lifestyle and culture had a negative effect on the youth and how his friends have scummed to the lows of life.

He stated, “I lost my friends in crime, unfortunately, some died, and others are in prison. I still know people who live off of it, they chose it.”

It was interesting to see him give insights about his childhood. It provides context for us fans to understand his journey. Surely, growing up in a tough neighbourhood had a major impact in his mindset and has contributed to his success.

The larger than life journey of Charles Oliveira

The story of Charles Oliveira, who overcame being informed as a child that he would require a wheelchair to win the lightweight title in the UFC.

His moniker “Do Bronx” is slang for “of the favela” in Brazil, and the fighter’s career began in Vicente de Carvalho’s favelas in Guaruja, close to Sao Paolo. When Oliveira was seven years old, he was diagnosed with irregular heart murmurs and bone rheumatism.

Charles lowly upbringing in the Guaruja area of Sao Paulo enabled him to enter the workforce relatively early in life. He recalls helping his mother serve cheese salads from a trailer when he was a young boy. Currently, he is set to headline in Abu Dhabi in the one of the most anticipated bout of the year.