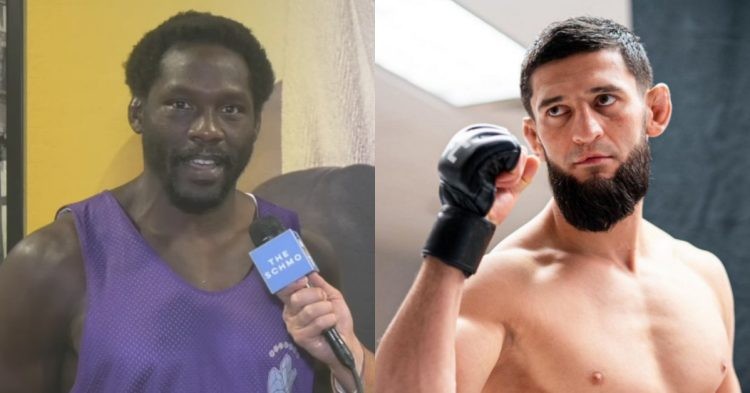 It looks like the UFC middleweight division will have a brand new addition to it! After difficulties cutting weight for his UFC 279 fight against Nate Diaz, Khamzat Chimaev has announced a move to 185lbs for his next fight. After his dominant display against Kevin Holland, it has put all the top contenders at middleweight on notice and Jared Cannonier is one of them!

Cannonier recently spoke to The Schmo regarding Khamzat’s move to middleweight. When asked about what qualities of Chimaev stand out to him, Jared’s answer was not exactly surprising. The Killa Gorilla especially praised Khamzat’s grappling. He was really impressed with how the Chechen fighter’s wrestling is more geared towards finding a finish instead of using it to accumulate points.

“My thoughts on him as an opponent? Damn, He’s a damn good grappler. He’s really good at taking guys down and progressing from there. He’s just not a crotch sniffer. So hats off to him for being a fighter as far as using his wrestling to fight, not just using his wrestling (to hold people down).”

Jared also spoke on possibly facing The Borz in the future. Despite praising Chimaev’s grappling, he stated that he will be fully prepared for Khamzat if he ever finds himself matched up against the 28-year-old.

Cannonier, who is coming off a loss against Israel Adesanya at UFC 276 for the middleweight title, is currently scheduled to face Sean Strickland in December. He is currently ranked 2nd in the division and Strickland is sitting at 7th.

Now that his move to middleweight is official, there are rumours that Khamzat Chimaev is rumoured to fight Paulo Costa. Recently, MMA journalist Ariel Helwani tweeted that Chimaev vs Costa is the fight to make. Paulo re-tweeted it and it looks like he is more than interested in fighting Khamzat.

The fight would make a ton of sense as there was a heated altercation between them recently. During the lead-up to UFC 279, Khamzat Chimaev and Paulo Costa ran into each other and their interaction was not exactly positive. Chimaev seemed like he was in the mood to fight The Eraser right then and there. However, things did not get out of hand as they were surrounded by fellow fighters.

Costa later put out a statement where he said Khamzat was scared to fight him. So a fight between the two would be massive. It will be interesting to see how Chimaev performs on the ground. At welterweight, he was usually the bigger fighter. But he will not have that advantage up a weight class. On top of that, Costa is a ferocious striker.

So how do you see the fight playing out? Let us know in the comments down below.