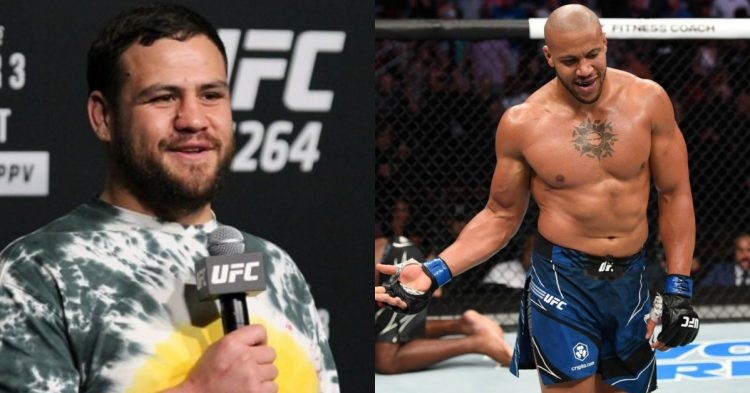 Ciryl Gane and Tai Tuivasa will headline the very first UFC event in France this weekend. Gane occupies the no. 1 spot in the heavyweight rankings, while Tuivasa is currently sitting in the 3rd position, Despite such high rankings for both fighters, Gane is a massive favourite heading into the fight on September 3rd.

Although Bon Gamin may not be the hardest puncher in the weight class, he more than makes up for it with his technique. Not only does he have elite footwork thanks to his dancing skills, but he also knows when to lunge forward and when not to. Despite getting tired in his last fight at UFC 270 against Francis Ngannou, it is believed that Gane has the cardio to last 5 rounds.

Hence, it is not hard to imagine why the fans may think Gane is the favourite to beat Tuivasa. With a record of 10-1 in his MMA career, Gane is in his absolute prime right now. However, Tai Tuivasa does not agree with that. Although he thinks Gane is a formidable challenge, Tai expresses that Gane should not take him lightly ahead of the fight this Saturday at all!

“We all know he’s (Ciryl Gane) a great athlete. He’s really fast and all these. But I excel in the cage. Once the cage door shuts, it’s only me and him. As much as people keep telling me I have worry about Ciryl, I think Ciryl has got a bit to worry about for me too” (h/t via The MacLife)

Tai Tuivasa has had 13 wins via knockout in his career and 7 of those came in the UFC. It included KO wins over the likes of Derrick Lewis, Greg Hardy and Augusto Sakai. So he is clearly a credible threat to Gane and if the 32-year-old is not careful, Tai has the power to end the fight in the blink of an eye.

Much like Derrick Lewis and the heavyweight champion Francis Ngannou, Tai Tuivasa is one of the fighters who utilize every single pound of the 266lbs limit for non-title heavyweight bouts. It is no different for the bout against Ciryl Gane either.

During the official weigh-ins for UFC Paris, Bam Bam came in at 266lbs. On the other hand, Ciryl Gane, who prefers to be nimble on his feet, came in at 247lbs, 19lbs lighter than his opponent on Saturday. The huge weight advantage means that Tai will certainly have more power behind his punches than the French fighter.

The 29-year-old fighter is excellent at using the weight difference to his advantage. Being a heavy-handed fighter comes with its own share of pros and cons. Although it gives a fighter the option of putting anyone’s lights out without much effort but also puts them at the risk of gassing out early into the fight. So it’ll be interesting to see which way it goes with Tuivasa at the upcoming event.

What are your thoughts on it? Do you think the extra weight will help Tuivasa? Or will it backfire against someone who is good with movements like Ciryl Gane? Let us know in the comments down below.