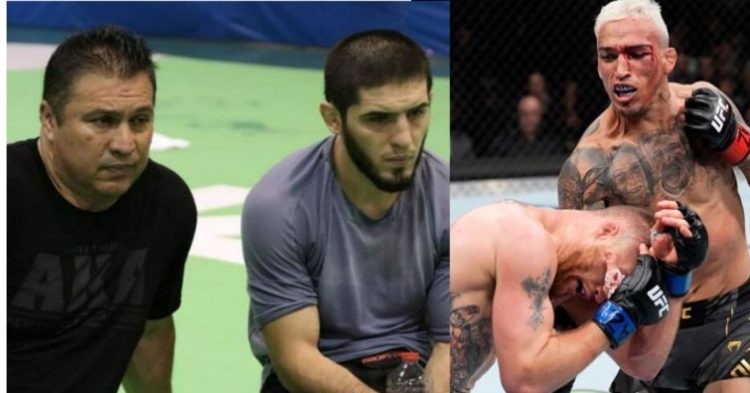 Coach Javier Mendez believes Islam Makhachev is going to win the lightweight belt and dominate Charles Oliveira. Ahead of the big main event between Makhachev and Oliveira at UFC 280 on Oct. 22, Mendez has declared Makachev will win the fight both on feet and ground.

The head coach from the American Kickboxing Academy has trained many successful fighters including the former UFC lightweight champion and Hall of Famer Khabib Nurmagomedov. But when breaking down all the skills and disciplines, Mendez says no one matches Makhachev.

“Well, first of all, he’s gonna take him down,” Coach Mendez said in a recent interview.

“It’s just a matter of when, but he will take him down, and Charles is not gonna be able to stand. If Islam doesn’t want to stand, he will not, he’ll be taken down. He is second to Khabib in being able to take people down, and he will go down.”

Talking about the fight, Mendez broke down the fight while stating that Oliveira’s jiu-jitsu won’t work this time as Islam has wrestling only second to Khabib.

“Charles will go down. Charles is not known to be a wrestler. Also, keep in mind, Charles has got such a phenomenal jiu-jitsu game. In MMA, in pure jiu-jitsu, he’s probably got the best game in the lightweight division.”

Mendez stated that they are prepared for Oliveira’s standup as well. Charles is one of the best all-rounded lightweights at present. He has showcased his incredible toughness and power in his fights against Gaethje, Chandler, Ferguson, and Poirier.

It is only a matter of time to witness this battle of the best lightweights in the current UFC. They will be fighting for the vacant title at UFC 280.

According to Mendez, Islam Makhachev is the most all-rounded lightweight in the division and the worthy heir to Khabib Nurmagomedov, who never lost a round or a fight in his career.

Behind the camera, only Mendez and other teammates of Islam know that Islam is the only man who is second to Khabib. Coach Said: “He’s the only one that has won rounds from Khabib. Never won a session, but he’s won rounds. And I’ve never seen that.”

Speaking of skills – both in striking and grappling, both Mendez and Khabib believes that Islam beats Charles. Part of the reason why they are so confident is that they know what Islam is capable of, as Javier is a long-time coach of Khabib and as per him; Makhachev has skills of different levels.

“In all the history, since 2012, since Khabib’s been sparring with me in front of my eyes, nobody has ever taken a round from him. No one’s ever won a sparring session. Not a sparring session with Khabib ever. Except for one man. Islam,” Mendez added.

Islam has a big chip on his shoulder and hopes of many ahead of this fight against a very opponent in Oliveira.

However, Charles is on another level right now, beating most of the top lightweights of this era – both on feet and ground. And in doing so, he has proved his worth as a champion. UFC 280 will feature this much-anticipated fight and answer a lot of questions.