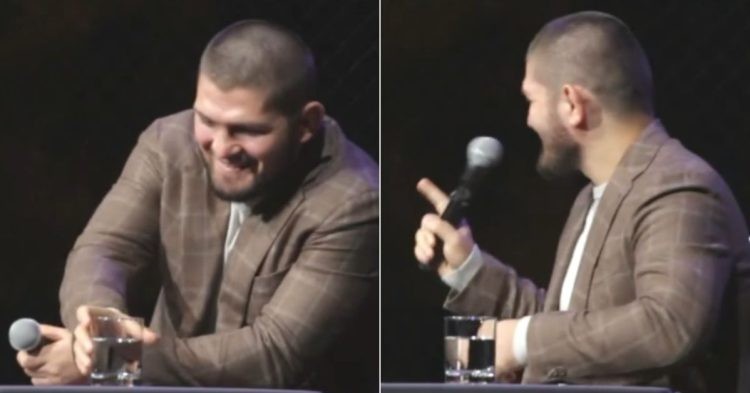 It’s safe to say that a lot of fans who have gotten into UFC in the last couple of years will remember Khabib Nurmagomedov as a coach more than a fighter.

A little more than two years ago, Khabib Nurmagomedov dominated the UFC Octagon as the UFC’s Lightweight Champion. The Dagestani fighter retired from mixed martial arts at UFC 254 after a second-round submission win over Justin Gaethje in the aftermath of his father’s demise. Since then, Khabib has followed in his father Abdulmanap Nurmagomedov’s footsteps and is enjoying his time being a coach.

Under his tutelage, Islam Makhachev currently reigns as the UFC’s Lightweight Champion, and Usman Nurmagomedov holds the Bellator’s Featherweight title. Moreover, Umar Nurmagomedov remains undefeated in the UFC’s Bantamweight division, with the future looking bright for the Dagestani fighter.

Needless to say, Nurmagomedov’s run as a coach has been nothing less than spectacular! So when Khabib was asked to choose between fighting and coaching, it took him a while to answer that question. And even then, we didn’t get an answer from him.

While we did not get an answer to what Khabib likes more between coaching and fighting, there were some other interesting questions that the Eagle did not keep to himself. For instance, Khabib chose football over wrestling. “For sure football, I am tired of wrestling. All my life I was wrestling.”

On an interesting note, Nurmagomedov prefers summer over winter, calls over texts, mountains over beaches, Dagestan over Abu Dhabi, coffee over tea, and not surprisingly, burgers over pizza.

During the interaction, the former UFC Lightweight Champion also shared his thoughts on Islam Makhachev’s upcoming title defense against Alexander Volkanovski at UFC 284. Nurmagomedov believes Volkanovski will be a tougher challenge than Charles Oliveira, and his fight IQ and heart could play a huge role. Regardless, he believes Makhachev will earn a stoppage win over the Australian fighter.

Is Cristiano Ronaldo Going to Chelsea?