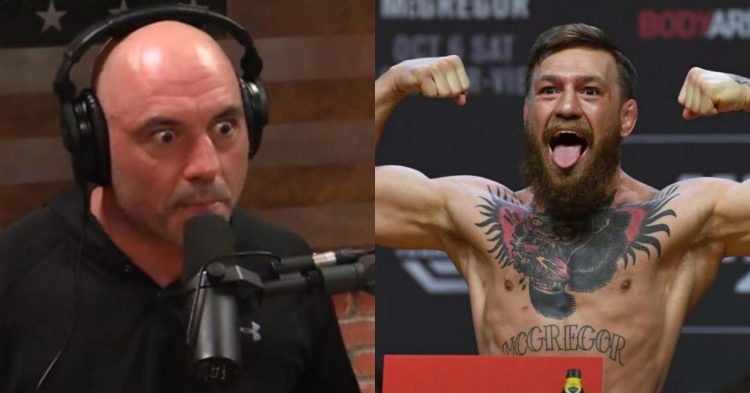 Weigh-ins are usually a hectic event for the organizers. It is usually the last time fighters come across each other before stepping inside the Octagon to settle their business. Hence the tension between the two fighters is bound to be high and it is evident by the intensity of their body language. Some may wonder, who is the most intense fighter in the UFC? According to Joe Rogan, it is Conor McGregor!

The Notorious One is always filled with intensity. As soon as he gets to know who he is fighting, Conor pinpoints his attention to prepare for the fight with full dedication. However, he just does not rely on his preparation for the fight. Conor also uses mind games to make his opponents uncomfortable.

One of his tactics is to unsettle the other fighter with animosity during the weigh-ins and Joe Rogan thinks he is the most intense during the face offs. However, he also gave a shoutout to Khabib Nurmagomedov as well. When Conor and Khabib faced off during the UFC 229 weigh-ins, it was one of the most intense and tension-filled moments in UFC history.

“Conor gets pretty f**king intense but so does Khabib. It all depends on whether or not they have like real animosity towards each other.” (h/t via xcellentmma)

The list of Conor McGregor’s intense rivalries is not short. From throwing down with Nate Diaz after the UFC 196 press conference to jumping the fence to get in Jose Aldo‘s face in 2015, Conor lives upto his nickname of being notorious.

Conor McGregor has been absent from the UFC since UFC 264

Conor McGregor has the biggest fan following in the UFC. However, the fans have not had the opportunity to see the 34-year-old compete inside the Octagon for over a year. After suffering a damaging leg injury against Dustin Poirier at UFC 264, Conor has decided to stay away from the sport. If recent reports are to be believed, Conor is not expected to fight anytime soon.

Following the reports of Conor not being tested by USADA in 2022, the anti-doping agency clarified its stance. According to USADA, it can not test fighters who are officially retired or not under contract with The Ultimate Fighting Championship (UFC). It basically hints that Conor may have sidelined himself from the sport until further notice.

Currently, the Dublin native is busy shooting the remake of the 1989 movie ‘Road House.’ With this movie, he will embark on his journey as an actor. It looks like Conor is quite enjoying his time outside fighting. He has even refused a rematch against Floyd Mayweather for $100 million. So it looks like fans will have to wait longer to see Conor McGregor throwing his trademark left hooks in the Octagon.