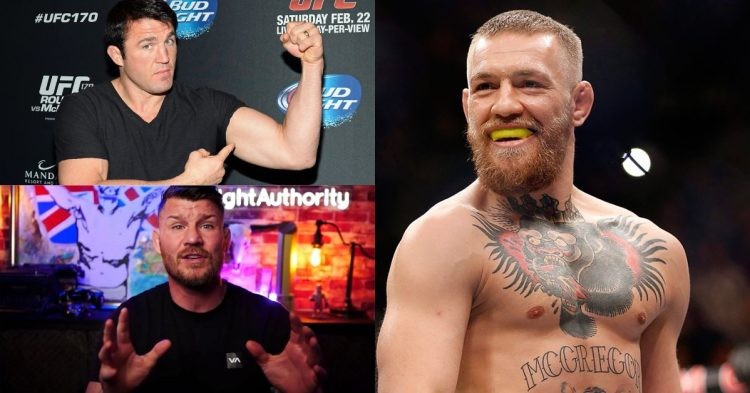 Conor McGregor is the biggest name in the world of mixed martial arts, and one thing that made him so famous is his unmatchable persona and mic skills. His awesome fighting style and hilarious trash talks have earned him the big stature that he has in the sport today.

The Irishman has a massive fan following and he’s also pretty active on social media. Recently, Conor replied to one of Ariel Helwani’s tweets, which showed a clip of Chael Sonnen’s classic trash-talk from his days in the UFC.

In the video, Helwani interviewed Sonnen ahead of one of his bouts against Anderson Silva. Upon being asked how the fight might go, Sonnen hit with this hilarious one-liner:

“It’ll be a verbal beating. Anderson Silva will be in tears before it’s all over.”

It is pretty evident that McGregor is fond of Sonnen’s trash-talking. However, recently Michael Bisping, who is considered another best trash-talker in the UFC, uploaded a video implying that Sonnen is not a bad guy and his whole persona is just a front.

McGregor replied to Helwani’s tweet and wrote: “a real classic bad moth******er is Chael P. Gotta give it to him.”

This tweet from McGregor would mean that the Irishman disagrees with Bisping’s comments on Chael. Before McGregor, there was Chael Sonnen, who paved the way for trash talking and drama, straight from a pro-wrestling.

Chael was considered one of the best trash talkers in the UFC for this reason and that’s what made him so watchable. Read the tweet below:

Check out some of the most famous UFC callouts below:

In the aforementioned tweet, both Conor McGregor and Helwani received a lot of replies for their tweets. Both McGregor and Sonnen made their career through their mic skills and both men have some of the most memorable onscreen moments, where they are seen decimating their opponents.

Nowadays, fight fans all over the world are getting drawn to the sport for the fighter’s persona, and surely ‘trash-talking’ is one of the prime characteristics of this sport. It attracts a lot more eyes, thereby increasing its followers.

Back in Sonnen’s days in the UFC, his mic skills only earned him a title shot against Anderson Silva. Although he lost both the fights, it would forever be embedded in the timeline of the sports, proving the importance of verbal decimation in this sport.

😂😂 a real classic bad motherfcuker is Chael P. Gotta give it to him.

Like Chael, McGregor also has several clips of his unmatchable trash-talk that went viral. This is also the reason what made press conferences so interesting for fight fans.

Currently, Khamzat Chimaev is making headlines being the ‘Bad Guy’ of the UFC, where he engages in backstage brawls, confrontations with his opponents, and calling out fighters from every division. This persona has made him a famous personality in the promotion and his recent heel persona has already made him the new UFC villain.

Bisping in his video named Chimaev a legit bad guy of modern UFC, while implying that Sonnen was never a bad guy. However, Conor seems to knowingly or unknowingly denounce Bisping and Chimaev while recovering Sonnen’s ‘Bad Guy’ character.