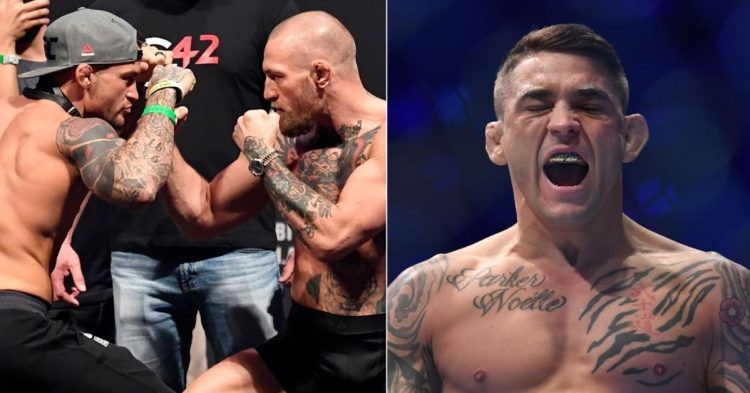 Dustin Poirier will return to action after almost a year to take on Michael Chandler in a three-round fight on the main card of UFC 281 inside Madison Square Garden, New York. The former interim lightweight champion is coming off a third-round submission loss to Charles Oliveira and will look to jump back to the winning column.

A lot has changed since the last time Poirier stepped inside the Octagon. Most importantly his mindset seemed to have taken a toll after getting himself too involved in the “business” aspect of fighting. Well, that’s what happens when you fight Conor McGregor. However, ahead of UFC 281, Poirier is back to the “kill or be killed” mentality.

“Somewhere along the lines of these last few training camps, I forgot that this is combat.” Poirier said, “I started to look at it like an athletic venture. Just the business side to fighting started bringing me into that mindset.”

“I am not going into the fight with that mindset. This is killed or to be killed by any means necessary.” Poirier added.

It’s safe to say, Conor McGregor is to blame for the sudden change in the mindset of Dustin Poirier in the last few fights. Poirier’s last three fights have come against Charles Oliveira and Conor McGregor twice.

How Conor McGregor changed Dustin Poirier’s mindset about the UFC?

UFC 257 and UFC 264 are two of the biggest fights in the history of the UFC. Poirier and McGregor shared the UFC Octagon twice in a span of six months in two of the highest-selling UFC PPVs of all time.

Needless to say, Poirier earned the highest purse of his MMA career, and with back-to-back victories, made a huge name for himself. From sponsors to his foundations, his net worth grew remarkably after those two fights. As McGregor has always said, “it’s only business.”

No wonder, Poirier was almost ready to hand up his gloves after the loss against Charles Oliveira. However, times have changed and the former interim lightweight champion has reignited his lost belief in what it means to be a  mixed martial artist.