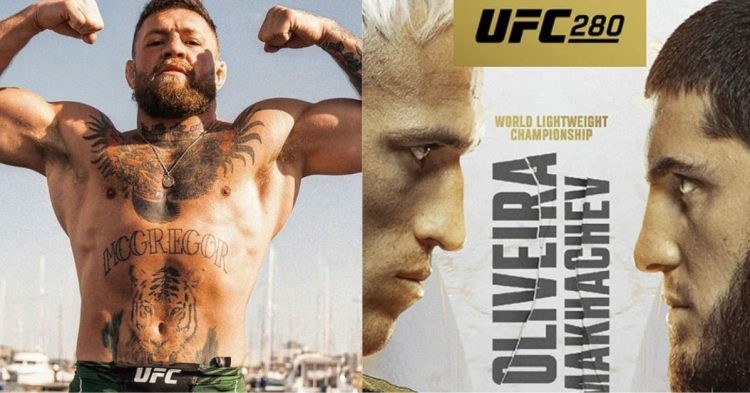 Conor McGregor has been out of action and on the sidelines for well over a year now. Despite his injury, Conor remains one of the most polarising and entertaining characters in the sport.

Previously, Conor took on Dustin Poirier in a trilogy fight at UFC 264. With the tie set at 1-1 before the fight, it was a highly anticipated matchup. Unfortunately, to the dismay of many, the fight ended in the very first round in an anti-climatic fashion after McGregor broke his shin.

Ever since, there has been talking of his return to the Octagon, and a potential move up to 170 lbs. However, with UFC 280 almost upon, Conor had an interesting, cryptic message to share. “I’m built like f*****g steel”, he says in his tweet. This could be in reference to his recently installed titanium shinbone.

Although many assumed that Conor will be leaving the sport for good, there has been no clear indication of it from ‘the Notorious’ yet.  Presently, he is working on a movie following which he will make his return either to boxing or the UFC.

Previously, Conor also spoke about his intentions of pursuing the Welterweight title in a fight against Kamaru Usman. However, it appears that he is also interested in fighting Oliveira or the successor of his arch-nemesis Islam Makhachev.

Who will Conor McGregor fight in his return?

For Conor, the possibilities of opponents in his return fight are endless. Be it a fight for the 170 lb strap against Usman (if he gets it back), a trilogy (redo) fight with Poirier, or a warm-up fight against Michael Chandler, the keys are in the Irishman’s hands.

Should Oliveira win back his belt against Makhachev, he has also expressed an interest in wanting to fight Conor in a big-money fight in Brazil. However, with the timeline currently not on track, it seems that Oliveira will instead fight Alexander Volkanovski, another fighter who has called for a money fight with McGregor.

With Conor still, the top draw in the UFC, who do you think he should fight next? Should he settle scores with Poirier and Nate Diaz or go hunting for gold against the likes of Usman, Oliveira, and Volkanovski? Leave your thoughts in the comments below.