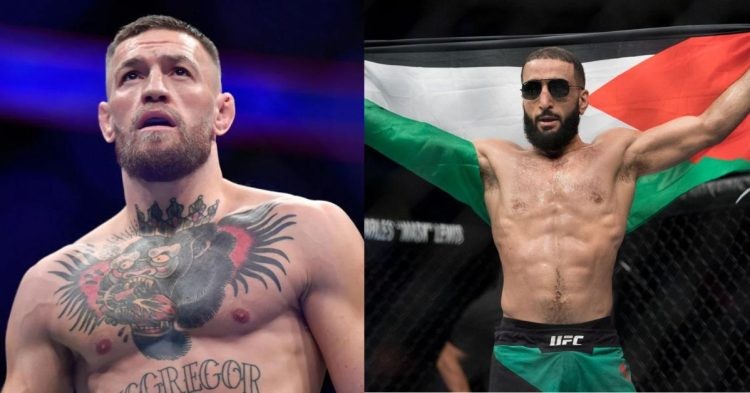 UFC welterweight contender Belal Muhammad has taken a jive at MMA Superstar, Conor McGregor on Twitter. Muhammad has been demanding a money fight or a fight against a ranked contender recently to solidify his career.

Belal is currently the No.5-ranked fighter in the welterweight division and is on an 8-fight win streak. His recent victory came against Vicente Luque in the main event of UFC Fight Night on April 16th.

‘Remember the Name’ has taken shots at the organization’s biggest star in McGregor before. This time, Belal tweeted sarcastically commenting that McGregor’s last win came about 7 years ago.

“After watching the first episode of the new season of the Game of Throne it’s crazy but I’ve come to the realization that Conor McGregor has one win in 7 years.”

While the post intended to dig at the ‘Notorious’, the statement is factually incorrect. This is because McGregor’s last win came against Donald Cerrone in 2020.

The Irishman has suffered two back-to-back losses against Dustin Poirier since then and will look to return to the Octagon soon following his recovery. On the other hand, Belal Muhammad will face Sean Brady in a welterweight bout at UFC 280.

Belal Muhammad referred to the Game of Thrones prequel, House of the Dragon which started on Sunday, August 21, 2022

In the tweet, Belal was referring to the latest prequel show of the infamous Game of Thrones series, House of the Dragon. Here’s everything you need to know about the show.

The much-anticipated Game of Thrones prequel, House of the Dragon, which is based on George R.R. Martin’s Fire & Blood book about House Targaryen, started premiering on 21st August.

The ten-episode Game of Thrones spin-off will “depict how the House of Targaryen fell into a bitter and brutal civil war known as the Dance of the Dragons — presaging the beginning of the end of the ruling family of Westeros.”

The former two-division champ Conor McGregor has been in the news for quite some time regarding his return to the sport. McGregor’s comeback is also currently one of the most anticipated occasions in the UFC.

‘The Notorious’ will look to bounce back after the leg injury that he suffered in the trilogy fight against Dustin Poirier. Recently, training clips of the Irishman have surfaced on the internet going back to training and adding new skills to his arsenal. Ahead of his return, Conor has been looking better in the posts.

Despite his two back-to-back losses to Poirier last year, McGregor is determined to make a successful return. There have been some talks and hints from the UFC officials about Conor’s return.

The Irishman’s manager, Tim Simpson has also recently confirmed that Conor will be returning to the octagon soon after the long layoff and rehabilitation.