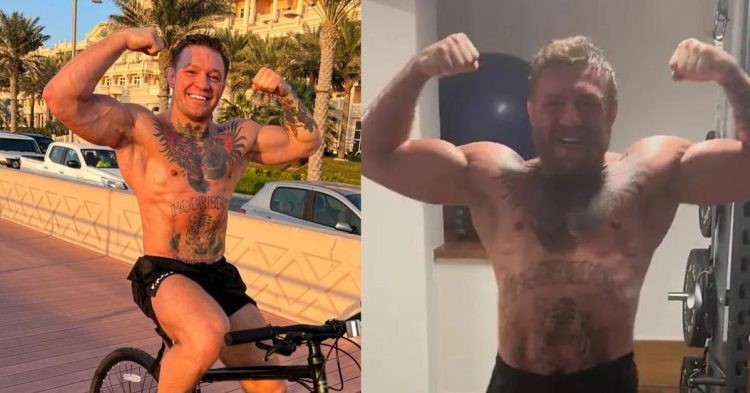 Former two-division UFC champion Conor McGregor is hoping to make history and make a successful comeback at a higher weight class. ‘The Notorious’ has been out of action since his injury and loss at the hands of Dustin Poirier in their trilogy.

Given McGregor’s height (5 ft 9 in/175 cm) and reach (74 in/188 cm), he can be pretty successful in the welterweight class. He had a dominant run in the featherweight and lightweight divisions and fought Nate Diaz and Donald Cerrone in the welterweight.

During his rehabilitation, the Irishman gained a lot of weight and bulked up to 190 lbs at one point. ‘The Notorious’ is very active on social media and he often shares his training clips and pictures of his new ripped physique.

McGregor is currently filming ‘Road House’ alongside Jake Gyllenhal and it is not clear when he will return to action. However, he hopes to return in 2023, possibly in the welterweight division.

What weight class will Conor McGregor fight in his UFC comeback?

Conor McGregor has fought across three weight classes in the UFC and is 10-4 in the UFC, with a professional record of 22-6. He suffered his first loss against Nate Diaz but later avenged his defeat a few months later.

After that, he made his lightweight debut against Eddie Alvarez and beat him to become the lightweight champion. McGregor made history after becoming the first-ever UFC champion to hold two belts simultaneously.

But later, he would fight Khabib Nurmagomedov at 155 lbs and lose via submission at UFC 229, suffering his second defeat in the promotion. ‘The Notorious’ then returned against Cerrone at UFC 246 and rebounded with a dominant win over ‘Cowboy’.

However, McGregor would then suffer back-to-back defeats to Dustin Poirier at UFC 257 and UFC 264. It is also in his third run-in with Poirier where he suffered a brutal leg injury and is out of action ever since. He hasn’t been active in the octagon but remains one of the biggest stars in the promotion.

McGregor hopes to make his much-anticipated comeback in the welterweight class. Previously he desired to fight for a title bout in either the lightweight or welterweight division. But now it is not sure if he would get a title bout or not in his comeback.