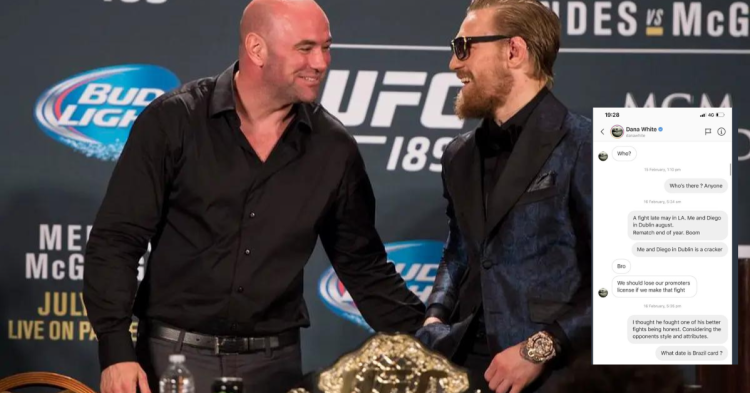 Conor McGregor is dropping bombs on social media. First, he announced his boxing return against Manny Pacquiao. And then he shared his private chats with UFC president, Dana White.

In those chats, Conor has asked to book a fight for him as early as possible on multiple occasions. The former champion was even eager to fight Diego Sanchez in Ireland. However, Dana White had no interest what so ever to make that happen.

Conor McGregor even wanted to fight Justin Gaethje. He was also offered the fight against Tony Ferguson after Khabib Nurmagomedov pulled out of UFC 249 due to the travel restrictions.

Here’s the finish of that exchange. Pre covid. Pre retirement.
Never turned down offer of Tony as was suggested at the time. I stated months in advance (early February) that I was not interested in being an alternate for two consistent pullouts.
Pushed for my own scheduled bouts pic.twitter.com/jXQD2dTWrL

3 weeks post my last record breaking event, I was campaigning for another blockbuster McGregor event to take place.
Sad about my season I must say 😔

However, McGregor did not want to be a step in for someone and suggested UFC build an even around him. But, White wanted to make sure that the interim title fight stayed intact and that’s why he had to go with Justin Gaethje vs Tony Ferguson at UFC 249.

Well, Dana White might not be a happy man after Conor McGregor released these chats. But, McGregor did try to get a fight after his victory over Donald Cerrone. Unfortunately, he did not ask for the fights against Dustin Poirier or even Tony Ferguson.

Conor McGregor announced retirement following UFC 249. The lightweight title will be defended at UFC 254. But, Conor knew that he would not be a part of this main event. McGregor would have had to wait for a long time to get a title shot against the champion.

Conor McGregor vs Manny Pacquiao is next

But, Conor McGregor has taken a detour it seems as he announced his boxing return. This won’t be the first time Conor would step into the boxing ring. A few years ago, McGregor fought Floyd Mayweather in one of the biggest fights in combat sports history.

Though the fight is not official yet as per Conor’s manager, the former UFC champion is seriously looking into this fight. After the potential boxing fight with Manny Pacquiao, Conor McGregor might return to UFC to regain his lightweight title. However, it won’t be surprising if he chooses to continue his journey in boxing.

The Notorious One expressed his desire to become a boxing champion leading up to UFC 246. Who knows whether McGregor is going to finally chase his boxing dream and go for the title after the Pacquaio fight.