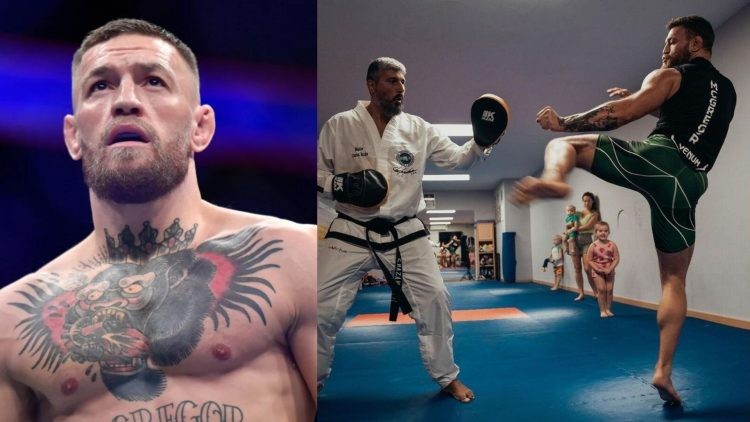 The former two-division champion Conor McGregor has recently posted clips of him training taekwondo in Spain ahead of his return into the octagon.

The Irishman has been out of action since his leg injury in his last fight against Dustin Poirier. McGregor’s fighting style has changed over the years and fans have been waiting for a long time to see the old Conor who used to do fancy kicks and karate-style trance rather than just boxing.

Conor McGregor is the biggest superstar in the history of MMA not only for his entertaining fighting style but also because of his charisma on camera and trash-talking ability on the mic as well.

Even though he doesn’t fight much in the octagon, Conor’s fights seem to get the most PPV in UFC. He knows how to sell a fight and draw crowds from all over the world – this is the reason why McGregor is UFC’s biggest superstar.

Although he has ventured into boxing against the boxing legend Floyd Mayweather to secure the biggest pay cheque of his career, it’s clear that MMA has always been his favorite combat sport. That is the reason why he still fights when he doesn’t need to as he became the highest-paid athlete of all time this year.

It’s for that reason that he is intent on pursuing a comeback once his injury rehabilitation allows despite it being a long, long time since he had to fight because he needed the money.

Conor McGregor aims to destroy his opponents with his kicks

Conor McGregor is currently in rehabilitation since his fatal injury in his last outing at UFC 264. Quite recently he has been seen training all aspects of his game to put up a statement-making performance in his return.

In a recent post, McGregor stated that he has not reached the peak of his kicking ability yet, but he’s still ahead of most fighters competing in the UFC right now. Though it is unclear who is going to be the opponent for his return, Conor issued a warning for his upcoming opponent in one of his posts.

“The first person I’m back fighting here is getting kicked around that cage. You are all garbage. You may have a little yup the yard kick in your arsenal but it’s not at the speed, the power, the length, and the control that it could be!”

‘The Notorious’ may be past his prime but his striking skills should not be underestimated in any way. In his recent bout, he was seen utilizing his kicks along with better footwork but the fatal leg break cost him tremendously.

With clips of him training BJJ and taekwondo alongside his striking, seems to ponder upon the question if we are going to see McGregor with a successful return despite all the criticism and skepticism.