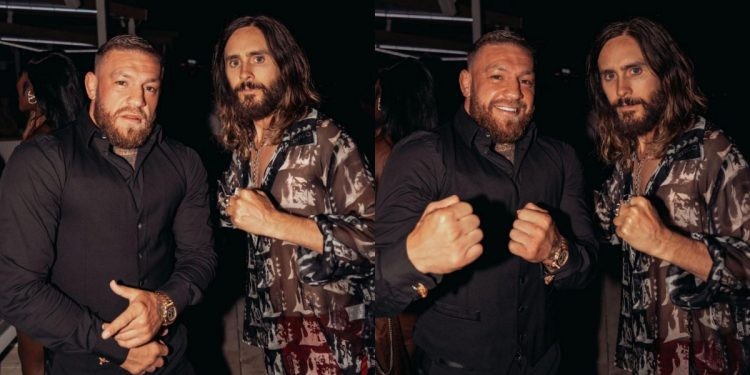 Is the much-talked-about Conor McGregor biopic finally set to happen with Jared Leto in the starring role? A recent meeting between the two has sparked a lot of speculation regarding the matter. With Leto previously expressing his interest in doing a biopic on McGregor, it seems like things are finally heading in the right direction.

In a previous interview, the Oscar winner stated that he really wanted to play Conor’s role in a movie based on ‘The Ultimate Fighting Championship’ (UFC). Jared is even ready for having de-ageing CGI done on his face to fit the role.

Conor McGregor took note of that and invited Leto to Ireland for a training session with him. The Notorious one also shared a fan-made poster of Jared Leto where the actor is playing him in the rumoured movie.

Although it all went quiet for a while, things are seemingly heating up once again. McGregor took to Instagram to post photos of him alongside Jared Leto, with the caption, “Talkin plots with (Jared Leto) and not movie ones.” He also tagged podcasting juggernaut Spotify in the post too.

Is there a business venture brewing between the two? Although the movie project seems to be the most logical one, the caption does suggest that the pair aims to do something that relates to Spotify. Maybe a tell-tale audio series based on Conor’s life? Only time will tell.

The 33-year-old fighter is a larger-than-life figure in the sport of Mixed Martial Arts (MMA). He has been an essential part of turning MMA into a mainstream sport that generates a ton of press. Hence, there is a lot of interest in seeing what goes on behind the scenes in his life.

Conor McGregor has already had a Netflix documentary made on his rise to the top of the UFC. It looks like the next documentary will focus on his recent injury. The Irishman snapped his ankle against Dustin Poirier at UFC 264. The documentary will reportedly deal with the aftermath of that and his road to recovery.

Conor has not been seen inside the UFC Octagon since July of 2021. But that is set to change later this year, as UFC President Dana White stated that the company was looking to book a fight for McGregor in the fall.

The Dublin native has also started to put his reconstructed leg to use. In a recent video, Conor was seen landing heavy leg kicks in a practice session. Hence there is optimism about seeing the fan-favourite in action this year once more.