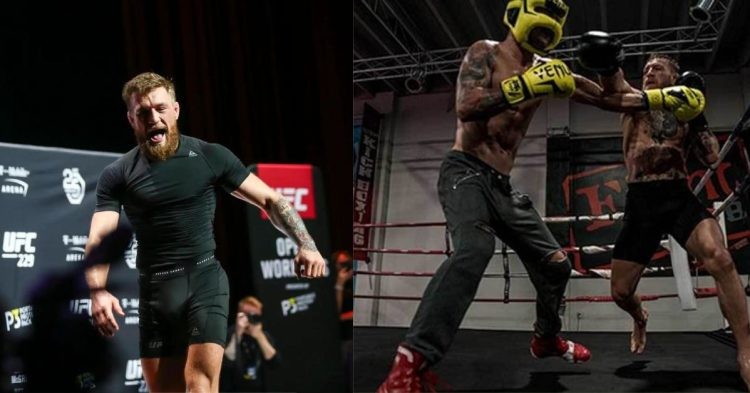 Conor McGregor has a 3-4 record in his previous seven contests since defeating Jose Aldo in December 2015 to win the undisputed UFC featherweight championship. Both of his most recent losses to Poirier.

McGregor experimented with boxing in addition to mixed martial arts in preparation for a 2017 matchup with Floyd Mayweather Jr. Even though he was knocked out in the 10th round, the fight was a huge commercial success.

However, McGregor hasn’t competed in a year, After breaking his tibia, he missed more than a year of action despite being in his prime. He is currently back in the gym and attempting to make a comeback. In a training video he shared on Twitter today, McGregor can be seen striking his opponent in the chest with a jumping knee after landing a spinning side kick to the face.

Although, Conor looks slick like he aways did. His striking is impeccable. In the spar, he showed amazing skillset. That being said, in latter half, he was seen showboating. He kept both his hands behind his back like he did against Eddie Alvarez at UFC 205. It worked perfectly then unlike in this spar. He got clipped right after. Although, Conor has looked human in his bouts, it has been rare to see him get punched in the face.

Regardless, The success of his recuperation has been confirmed by doctors, and UFC president Dana White is eager for him to resume fighting.

Fans react to the sparring clip published by Conor Mcgregor

However, it is widely believed that if McGregor is releasing footage of himself sparring, he is still enthusiastic about the game and plans to play again soon.

Fans are understandably talking about this now. Many people are excited about the idea of him going back into the Octagon, but some have dug a little deeper and hypothesised that, given the absence of tattoos, the footage is from before 2015. Here are few fan reactions:

“They said you was done . Can’t wait for the return”

“The king! Looking forward to you return”

“Where is your tatto, cocaine dad”

“yeah try sparring a real fighter, not a paid actor”

When was this sparring session, Conor?

Paddy Pimblett has recently been mentioned as one of McGregor’s potential opponents when he returns to the Octagon.

Floyd Mayweather is rumoured to be up for another fight, although the American has said he would rather have an exhibition. It does seem that McGregor will make a comeback now that he is back in training.