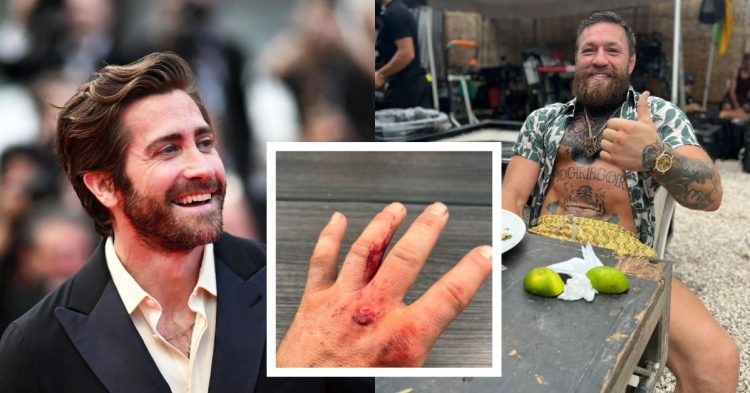 Former two-division UFC champion Conor McGregor has begun shooting with Jake Gyllenhaal for the new remake of the movie ‘Road House’. While Conor was recovering from the leg injury that he suffered during his trilogy bout with Dustin Poirier, it was revealed that the Irishman will make his acting debut.

‘The Notorious’ has been sharing clips and pictures on his social media while filming the movie. Recently, the UFC icon shared a picture of his busted fist on his Instagram. It seems like Conor somehow got injured while shooting. He captioned the post: “This Roadhouse is mine.”

Not much is known about McGregor’s role in the movie but he will not play himself. However, it has been confirmed that Jake Gyllenhaal will star as a former UFC fighter who later takes the job of a bouncer. This movie will surely attract a lot of attention with the addition of McGregor to the cast.

The UFC superstar is already one of the most famous athletes in the world, and his acting debut in Hollywood will only grow his fame. It was confirmed that McGregor has traveled to the Dominican Republic to shoot for the film.

Moreover, the Irishman has been talking about his return to the Octagon for quite some time. But with him focusing on the film it seems like it’s going to be a while before we see Conor back in action.

Conor McGregor was set to return to the UFC at the end of this year, but it was later confirmed that the ‘Notorious’ will make his comeback at the beginning of the next year. While preparing for his octagon return, McGregor will venture into Hollywood.

McGregor has been enjoying a lavish life over the last year, traveling the world with his family on their Lamborghini yacht. Conor’s return to the UFC is one of the most anticipated comebacks in combat sports.

The UFC superstar has bulked up and stated has already confirmed he will fight in the Welterweight division. But some fans suggested that Conor might be bulking up for his acting debut. The former champion will follow former UFC star Ronda Rousey, who also started her career in Hollywood a long time ago with the Fast and Furious franchise.

In August, it was announced that ‘the Notorious’ will co-star alongside Jake Gyllenhaal in Amazon Prime’s new re-imagining of the 1980s classic, Road House. Doug Liman will direct the movie who is best known for making ‘Edge of Tomorrow’ and ‘Bourne’ trilogy.

Even though fighting is what Conor is best known for, over the years the Irishman has ventured into different endeavors and his acting debut only solidifies his legacy. After ‘Road House’ it is sure that Conor will get more acting roles in Hollywood.