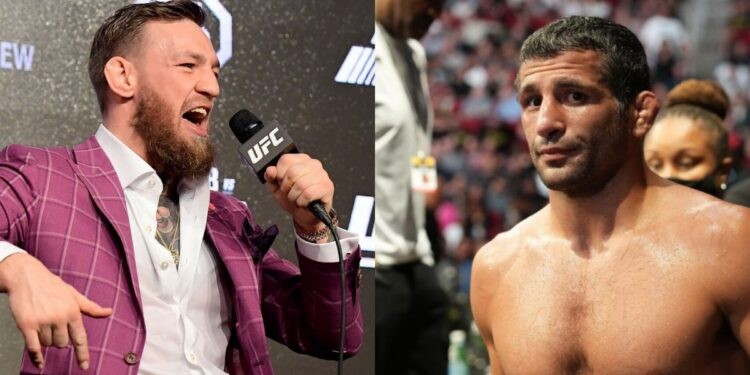 Beneil Dariush is a prominent fixture in the top half of the star-studded lightweight division. The no. 6 ranked fighter is on an impressive 7 fight win streak. Most notably, Dariush beat Tony Ferguson and Carlos Diego Ferreira in his last two fights in a dominant fashion. He is in contention to fight Islam Makhachev; the winner of the bout will almost be a guaranteed no. 1 contender for the belt next.

For the majority of his career, Beneil Dariush was a mid-table fighter who never got going despite having all the talent in the world. However, that changed after his loss to Alexander Hernandez at UFC 222 in 2018. The 33-year-old made some key adjustments to his approach and went on an unbeaten run that included 3 knockout finishes and 1 submission win. But Dariush has seemingly failed to impress The Notorious One. In a now-deleted tweet, Conor wrote,

“Beneil Dardush is the biggest nobody in the company”

Is Conor McGregor angling for a fight against Beneil Dariush?

Conor McGregor is on the hunt for an opponent for his comeback fight later this year. UFC President Dana White has already made it clear that McGregor will be ready to make his much-anticipated return to the Octagon in the fall. But there are still plenty of doubts as to who he may face. Names such as Nate Diaz, Charles Oliveira, Michael Chandler and Dustin Poirier have been circulated to be Conor’s next opponent.

Can the fans now add Beneil Dariush to the list of names as well? McGregor’s call out of Dariush has certainly made things interesting. Although it may not be the most attractive option on paper, Beneil Dariush will be a credible opponent for Conor to face at this stage of his career. He wants to fight for the title on his UFC comeback itself. However, it may cause an uproar amongst the other contenders if Irishman gets the next title shot.

But a win over a top-ranked fighter such as Beneil will leave no room for debate whether Conor McGregor deserves a title shot or not. It is also a very winnable fight for McGregor as well. Beniel has suffered 3 knockout losses so far in his career. On top of that, the BJJ expert only has a takedown accuracy of 34%.

Conor has a takedown defence of 66% and his power has the potential to put Beneil Dariush in a lot of trouble throughout the fight. The contest ultimately may not be the most glamorous in the world, but it will give McGregor a lot of credibility; something that he has lacked in the last couple of years.