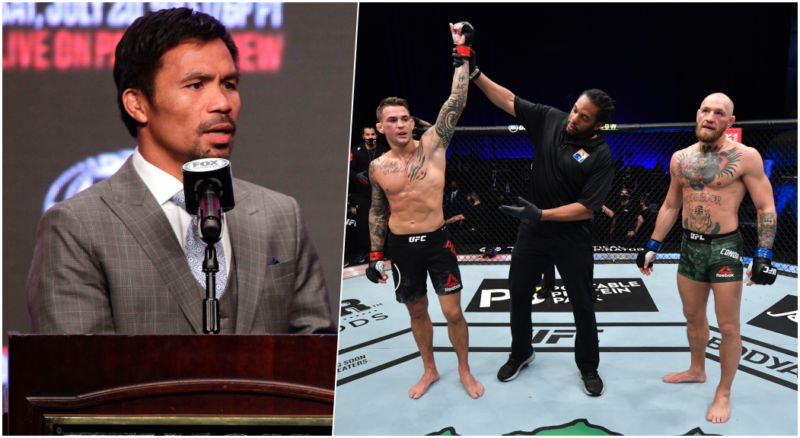 More than a week has passed since UFC 257, but the world still doesn’t seem to get over the fact that Conor McGregor got knocked out. That event marked McGregor’s first ever KO loss and Poirier’s revenge against him. Since then, half of the world is busy trolling Notorious, while the other half is finding a reason to it. Now, another name has been added who is citing the possible reason the Irishman fell short in the rematch. It is none other than the boxing legend Manny Pacquiao. In a tweet, BoxingScene has quoted Pacman saying McGregor might have underestimated Poirier during the rematch.

The Filipino legend’s opinion can very well be perceived as a possible difference between how both men mentally approached the rematch. Looks like Dustin’s got a mental edge over McGregor. Though Poirier’s win was heavily influenced by the tactical adjustments he had made and his calf kicks, the mental aspect of the game can’t be overlooked either. The mental resilience of a fighter is equally important as his strategy and techniques

Also read: Who Won the Sparring Sessions Between Kamaru Usman and Gilbert Burns?

It was natural that Poirier was mentally a cut above than McGregor as he had to prove some points. The biggest factor was revenge. He had to avenge his years old defeat at the hands of McGregor. Plus, he wanted to show that he’s the uncrowned champ of 155lb division. On the contrary, McGregor was to be paid a huge sum regardless of the outcome of the fight. The odds were also clearly stating him to be the favorite of the fight and a better fighter than Poirier.

Poirier had a humongous task to prove many people wrong. And just as Manny Pacquiao said, McGregor underestimated Poirier. These things resulted in Poirier being a cut above McGregor mentally during the fight and eventually coming out as the victor.

What do you think what factors led to Poirier’s win over Conor McGregor? Don’t forget to let us know in the comment section below what do you think about the rematch between McGregor and Poirier.

Who Won the Sparring Sessions Between Kamaru Usman and Gilbert Burns?

Max Holloway vs Dustin Poirier 2 – Who Wins the Rematch?