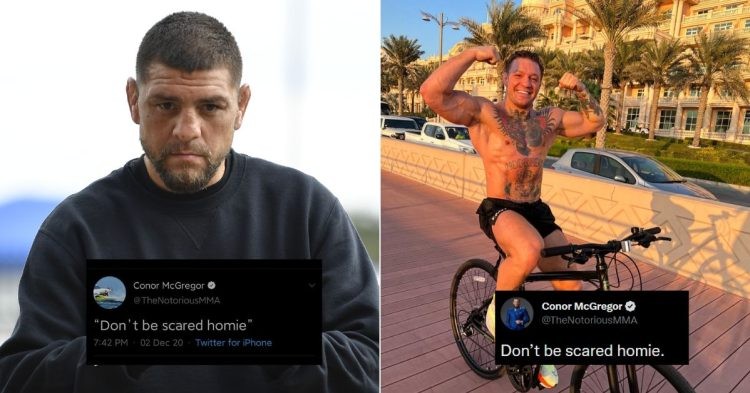 Conor McGregor is looking huge ahead of his much-anticipated return to the UFC. The former two-division champion recently revealed that he weighs in the excess of 250 lbs. He has also confirmed that his return will be in the UFC’s Welterweight division.

McGregor posted a photo of his incredible physical transformation and had a catchy caption to go by it. While on Instagram, he called himself a love child of Bruce Lee and Arnold Schwarzenegger, on Twitter, he quoted the legendary Nick Diaz.

“Don’t be scared homie” McGregor captioned his most recent photo. The line was made famous by Nick Diaz, who challenged KJ Noons with the same statement during his time in Strikeforce. This is not the first time that McGregor has used the same line. Back in 2020, McGregor allegedly called out Khabib Nurmagomedov for a rematch with the same statement.

Conor McGregor calls out Khabib Nurmagomedov for a rematch

Conor McGregor quoting Nick Diaz hours after calling out Khabib Nurmagomedov for a rematch is certainly no coincidence. McGregor is looking to make his return to the Octagon in 2023.

However, there are still doubts about his comeback considering McGregor has still not reinstated himself in the USADA pool. Owing to the same, there have been accusations of steroids.

So it’s safe to say it will be at least six months before we see him compete inside the UFC Octagon once again. Be that as it may, there’s still no clarity regarding McGregor’s future. However, as far as his recent tweets go, the Notorious still hasn’t retired from mixed martial arts.

Conor McGregor has a plethora of options for his UFC return. While Michael Chandler continues to advocate for a super-fight against the Notorious, a match-up against the likes of Charles Oliveira, and Justin Gaethje are also a great option.

Meanwhile, a fourth fight against Dustin Poirier is always right around the corner. What lies ahead for Conor McGregor in his UFC journey, only time will tell.