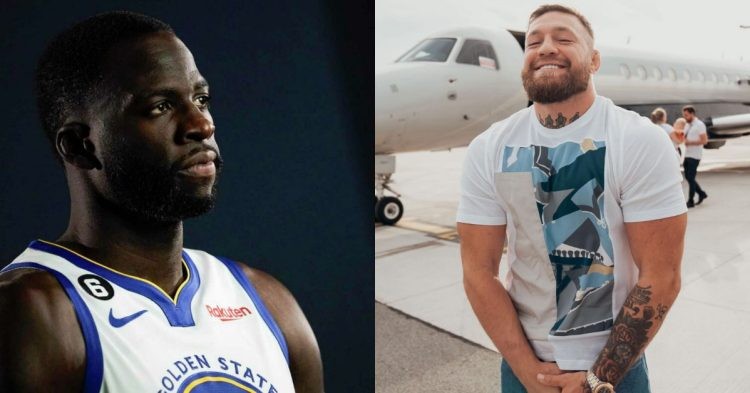 Draymond Green is a name that MMA fans may remember because of an incident with Conor McGregor. He was recently in the headlines because he was involved in a fight with his Golden State Warriors teammate, Jordan Poole.

In a recently released video by TMZ Sports, Green could be seen getting into Poole’s face. Once Poole shoved him away, Green swang a big right hand which knocked Poole out cold. It was definitely a sucker punch as Jordan did not suspect the attack at all.

Damn. That is a very clean KO. Poole was out. Not sure how you can keep them both on the team after that. pic.twitter.com/j1O2FOSYU9

Although basketball does have a history of fights breaking out on the court, this particular incident took place during a practice session. Draymond later apologized for his inappropriate behaviour. However, MMA fans have a great memory and they are very unforgiving. So it was no surprise that fans pointed out Green’s prior social media exchange with Conor McGregor.

Ahead of McGregor’s 2017 boxing debut against Floyd Mayweather, The Notorious One was wearing a Golden State Warriors jersey. However, Draymond took offence to that and posted on social media that the team was going to root for Floyd and that Conor should take off the jersey. It turned out to be a bad idea as Conor did what he does best, destroyed Green with his replies.

“That’s C.J Watson mate. I don’t know who the f**k you are. No disrespect tho kid, keep hustling and stay in school.”

In honor of Draymond Green’s sucker punch here is his only other combat sports experience: pic.twitter.com/rEuvchIXTg

Although it was certainly a savage insult, what followed, takes the cake! Not only did Conor shut Green up, but he also took a nasty shot at the sport of Basketball!

“Now ask yourself why I’m rocking C.j when I don’t know or give a f**k about basketball. I dribble heads off the floor. Not a ball. This is no game here kid.

Conor McGregor will be remembered as one of the most important figures who played a crucial role in popularising MMA. He had the ability to sell fights and end careers with his verbal skills. Because of his charisma, Sean O’Malley called him the GOAT.

What he did to Jeremy Stephens during the UFC 205 press conference, is still considered the best insult in UFC history. “Who the f**k is that guy?” remains one of the most quoted insults in the MMA community.

Amongst his many memorable encounters, the one with Draymond Green will rank very high. The recent incident with Green has given the fans a chance to remember the interaction with Conor and Draymond fondly.

Here are some fan reactions regarding the incident on Twitter

Bro really thought he did something. 10-7 Conor.

conor had the best swag man

At present, it seems like Conor McGregor is out of commission. He has not been in the USADA pool and has not been tested even once in 2022. So the rumour has it that Conor has secretly retired. He even went as far as to decline a huge $100 million boxing rematch against Floyd Mayweather as well. As there is no official word on his status, fans will have to wait patiently to know when he fights next.