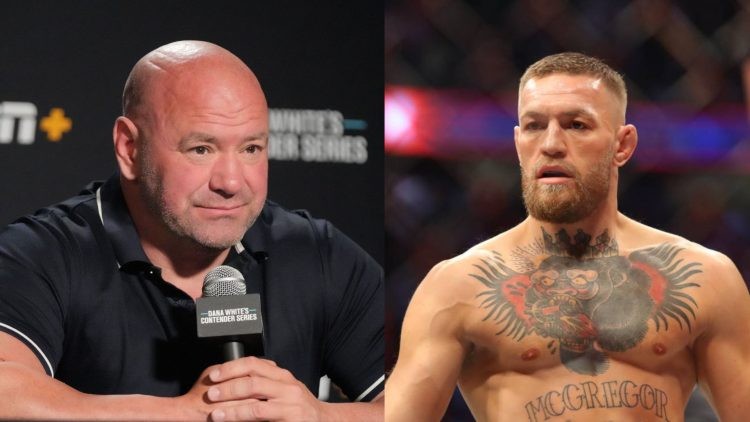 Conor McGregor has been out of action for nearly a year now. Having suffered a horrific leg injury in his trilogy bout against Dustin Poirier, there were doubts cast over his future in the octagon. Moreover, there were talks of a potential boxing matchup as well.

It was recently reported that a rematch between Conor McGregor and Floyd Mayweather is in the works. The rumors filled the internet after McGregor posted a picture from their first matchup on his Instagram and captioned it “I accept”.

However, it seems like they were just rumors and Conor McGregor will be returning to the octagon after all. UFC president Dana White has recently confirmed that McGregor will make his return either at the end of this year or early next year. During a recent appearance on The Jim Rome show, White was asked to comment on the Irishman’s future, to which he replied by saying:

“(Conor McGregor’s return} will be in the cage. Conor’s looking to come back the end of this year, early next year.”

Who will Conor McGregor face upon his return to the UFC?

Even though Conor McGregor has had a run to forget in the UFC, he still remains to be one of the biggest names across all combat sports. There are a lot of fights that make sense for ‘The Notorious One’ upon his return to the octagon,

A potential matchup against Michael Chandler will be a treat to watch. Interestingly, Chandler has called out McGregor as well on several occasions, adding fuel to the fire. Moreover, a trilogy bout against Nate Diaz can be made as well. It is worth noting that Diaz has only one fight left under his UFC contract. And a trilogy fight will be a fitting way to leave the company.

Oliveira is intrigued by a McGregor fight and the pay day along with it 💰 pic.twitter.com/Fl5LdA4ulD

Apart from these two, a title fight against Charles Oliveira can also be made. While this seems unfair up to an extent, the Brazilian has made his intentions clear of wanting to fight the Irishman for the title. With that being said, it remains to be seen as to who McGregor takes on upon his potential return to the UFC later this year.