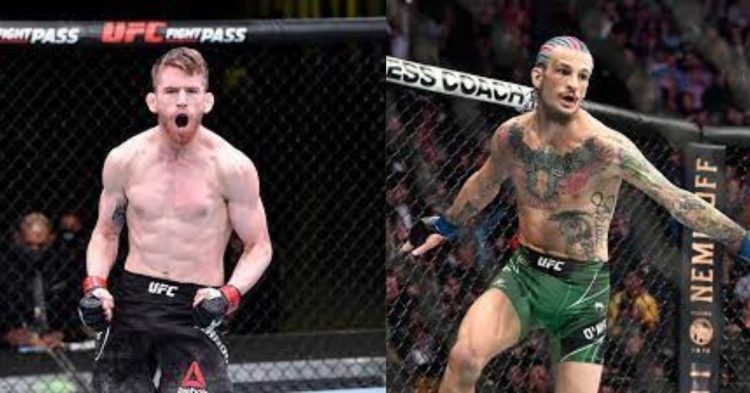 UFC’s top five Bantamweight contender Cory Sandhagen had some words to say about ‘Sugar’ Sean O’Malley when asked, how the flamboyant O’Malley would fare against the former Bantamweight Champion Petr Yan at UFC 280.

Talking to James Lynch Sandhagen said, “I don’t think he’s been put through any fires yet man, like his only fires that he’s been put through its like when chito hurt his leg and then he ended up losing that fight, like I can’t really think of any of his fights where he’s been put through a sizable amount of adversity and i know that when you’re fighting someone like Yan there’s definitely a high probability that you’re gonna face some s**t in that fight and yeah i think it’s gonna be a lot for him”.

Cory Sandhagen is spot-on in his analysis of O’Malley as ‘Sugar’ hasn’t been through any significant adversity yet in his career. It’s weird to think that a guy who made his debut five years ago has only fought two ranked opponents. The only ranked fighter he beat was fifteenth-ranked Raulian Paiva, his last fight was against a top ten fighter Pedro Munhoz which was ruled out a NC after an unintentional eye poke by O’Malley.

What’s next for Cory Sandhagen and Sean O’Malley

Cory Sandhagen is set to fight Song Yadong this Saturday at UFC Fight Night. Sandhagen’s last fight was for the title against Petr Yan at UFC 267 which he lost via U-Dec. Sandhagen has very slim chances of getting another title shot, even if he gets past number ten ranked fighter Yadong. Sandhagen would probably still be required to get a win against a top-five fighter to get in the title picture. ‘Sugar’ Sean O’Malley on the other hand has taken a huge step-up in competition fighting the number one ranked UFC bantamweight and former champ Petr Yan. But that also means that a title shot is almost confirmed for O’Malley if he gets past Yan.