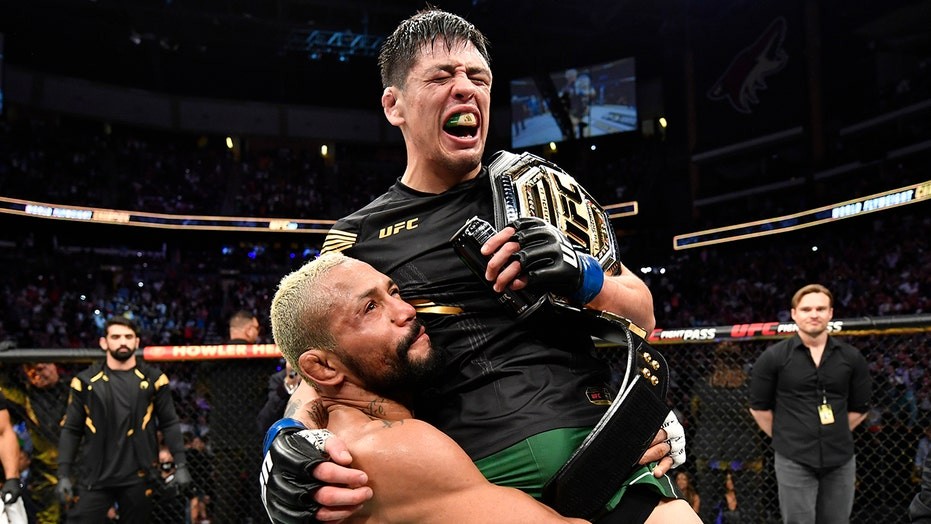 UFC 270 hosts the trilogy flyweight title fight between the Champion Brandon Moreno taking on Deiveson Figueiredo. Moreno looked to be very respectful towards his opponent all throughout the fight week. However, Moreno was amused by the former flyweight champion’s response.

Brandon Moreno is Undoubtedly one of the most likeable fighters in the UFC and was put back when Figueiredo called him a “crybaby”. The former champ was referring to Moreno’s emotional response to his title win at UFC 263 in their second fight. Figueiredo claims that Moreno is only obligated to face him for the third fight.

Both the fighter would be creating history as they walk to the cage for the third consecutive time in a row, in a span of just 406 days. The first bout of theirs ended all square where Moreno took the belt away from Figueiredo in their second clash at UFC 263. “The assassin baby”, dominated the whole fight upsetting Figueiredo in the third round via rear-naked choke.

Moreno is now looking to secure his first successful title defence as he plans.

Brandon Moreno comments on his Feud with Henry Cejudo

Brandon Moreno was a cast member in The Ultimate Fighting Championship season 24. Henry Cejudo along with Joseph Benavidez were the coaches for the season. Things went south for the former “brothers” when Cejudo did not pick Moreno on his team.

Cejudo was apparently unaware of Moreno’s rankings and went ahead to make Alexandre Pantoja his first pick. This meant, that Moreno, who was the 16th pick straight up went to Benavidez’s team. Pantoja later went on to beat Moreno in a fight, eliminating him from the show.

Things get even more dramatic as Cejudo now would be on the other side of the cage helping Figueiredo out for the trilogy fight. Moreno has been vocal about how he feels betrayed by Cejudo’s actions.

However, Cejudo responds to Moreno and says “Am I the enemy here, dude?” . “It was an accident, what happened at TUF. It wasn’t meant to be like that. But what he did? OK. The gloves come off.

UFC 270 is expected to bring out thrilling fights with interesting matchups. Both the title fights have dramatic premises which make assuring a nail-biting experience for the fans.