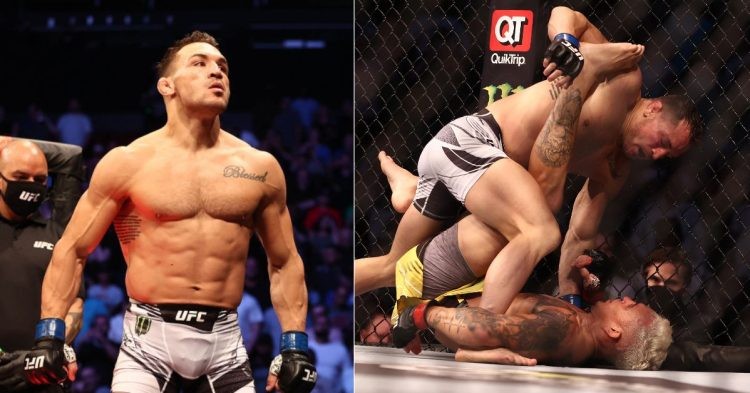 Michael Chandler’s signing in the UFC ran headlines all over! The former Bellator Lightweight Champion made his UFC debut in the back of an impressive knockout win over Bensen Henderson. He immediately caught the attention of the UFC fans after getting the chance to be a backup fighter for Khabib Nurmagomedov vs Justin Gaethje back at UFC 254.

One of the hottest free agents, Chandler had earlier refused to sign with the UFC after allegedly getting a lucrative deal with Bellator. Having spent most of his MMA career there, Chandler finally decided to step inside the UFC Octagon and how!

In just his first fight under the UFC banner, Chandler took on top-ranked Dan Hooker in his UFC debut back at UFC 257 on the same card as Conor McGregor and Dustin Poirier. The lead-up to the fight wasn’t very respectful, and while there was no back and forth as such, both fighters did exchange comments.

One year later, Chandler looks back at Hooker’s trash talk and shares his thoughts on the same in a recent segment with MMA on Point ahead of UFC 281.

“They invested like a whole lot of money to get that guy out of his contract and get him over to the UFC and they are gonna throw him in with me.” Hooker had said at the time. Reacting to the same, here’s what Chandler had to say.

“He don’t know how much money I am making. He thinks he does.” Chandler said with a smile on his face.

How much does Michael Chandler make with his new UFC contract?

There are no official numbers that confirm how much Chandler is earning from his UFC contract, but it’s safe to say he sits right at the top.

According to reports, Chandler picked in the excess of $500,000 for his last fight against Tony Ferguson. So it goes without saying, he should be earning more than that with his new UFC contract.