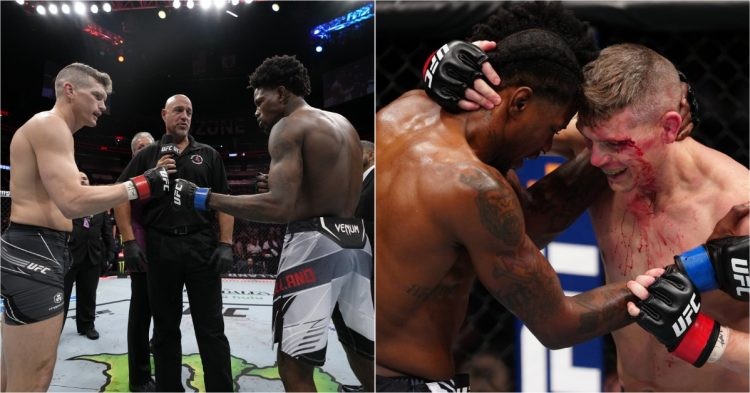 Kevin Holland and Stephen Thompson gave the crowd their money’s worth in the main event of UFC Orlando. The bout lasted for 4 glorious rounds and both Wonderboy and Holland gave it their all to entertain their fans. It was full of big moments, exciting action, and a lot of drama. But, at one point it did not look like the bout was going to round 4.

Stephen Thompson was dishing out an obscene amount of punishment against Holland in the third round of the bout. His kicks were more potent than his punches. Every time Wonderboy threw his legs at Kevin, it got a big reaction from the 30-year-old. Even Holland himself admitted that Thompson’s pace gave him a lot of trouble in the bout.

In the second minute of round 3, it looked like Thompson was going to finally secure the stoppage after rocking The Trailblazer. The former welterweight title contender landed a big liver kick earlier in the round. It was bothering Holland throughout the round. At the 1:56 minute mark of the round, Thompson landed a big knee in the clinch, which crumbled Holland.

This one’s not over yet!!

An accidental groin strike offers a pause in the action #UFCOrlando pic.twitter.com/KwfM8sEEiJ

Referee Dan Miragliotta thought Kevin was hurt because of the earlier liver kick and waived off the fight. However, Holland immediately pointed towards his cup and implied that it was an illegal groin strike from Stephen. The ref then reversed his decision and called for a time-out instead. It was a very bizarre moment and fans pointed it out online.

Looked like Big Dan waved off the fight and now he is saying it’s a growing strike. That was confusing.

He definitely waved off the fight but then reversed after

Who made the decision to put Dan Miragliotta in the main event over Marc Goddard? Seriously.#UFCOrlando

Dan is so trash

He called it then changed his mind

He waves it off. He thought holland was hurt from the body shot, when holland was really playing for time by tugging wonder boys heart strings

if they actually ended that

it would be the worst stoppage in HISTORY

Not only the fans, but the whole scenario also confused Stephen ‘Wonderboy’ Thompson as well. Usually, fighters start celebrating as soon as the ref stops the fight. But Wonderboy was in doubt about the stoppage as he looked on with confusion. In the post-fight presser, he reacted to the incident.

“I was in close, I think I had him up against the cage and I threw either a knee or a punch. And I think I might have clipped his cup or I got him in the groin and which is why they stopped it.” It looks like Wonderboy did not think the ref had stopped the fight for good. It also explains why he did not celebrate.

He continued, “I don’t remember any of that. It’s funny, I have to go back and watch it because I don’t remember a dang thing. But I do remember having to stop because of a low blow. Not sure if I actually hit him there. But, you gotta take a break.”

Stephen Thompson ultimately got the win after the following round. His constant kicks had a major impact on Holland’s right arm and it broke. Hence, Kevin’s corner decided to save him from any further punishment and decided to stop the bout at the end of round 4.

Thompson had lost two fights in a row before this one. Hence this performance will give Thompson a lot of confidence as he expressed his wish to prolong his fighting career. His career MMA record stands at 17-6-1.