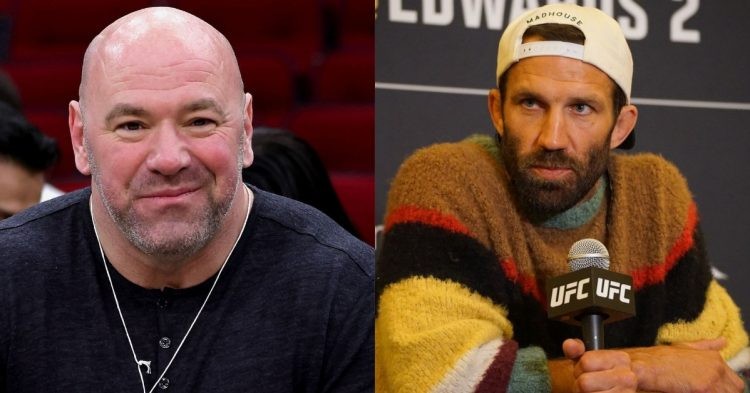 While speaking to Ariel Helwani at the MMA Hour show, Rockhold made several allegations against the UFC President and also made a bold claim that Dana controls the narrative and fans end up believing his statements.

Moreover, the former middleweight champion criticized White for not promoting him well throughout his UFC career and explained the reason behind his anger toward the UFC President.

“Dana never gave me a chance. From the moment I came into UFC, he never gave me a f*****g chance. Wrote me off, never highlighted my years on Strikeforce or anything that I did on my wins and only my losses.”

After Luke Rockhold claimed that UFC President Dana White never gave him a chance throughout the entirety of his career, Ariel Helwani questioned the former champion whether he has any idea as to why Dana never offered him a chance in the UFC.

To, Rockhold said that he has no idea why that happened. However, he added that unlike other fighters he never received any attention or respect from the promotion as well as his rivals. Moreover, he was frustrated with not getting a title shot despite being a two-time Strikeforce champion.

“Everybody else got respect and was going into world championship fights and consideration for. I got nothing. You know two-time defending Strikeforce champion coming in there and you haven’t done s**t.”

Thereafter he slammed the UFC matchmakers for booking him against Vitor Belfort and also alleged that he was pushed to face him despite knowing that Belfort was taking PED’s. In the end, Rockhold spoke about his retirement and how he needed to fight Paulo Costa to prove to fans that he can deliver a good level of performance.

It is needless to say that injuries hampered the former champion from getting a proper run of fights in the UFC. Regardless of all the recent controversies, Rockhold has established his legacy as an all-time great and will go down as one of the best middleweight fighters in the history of UFC.