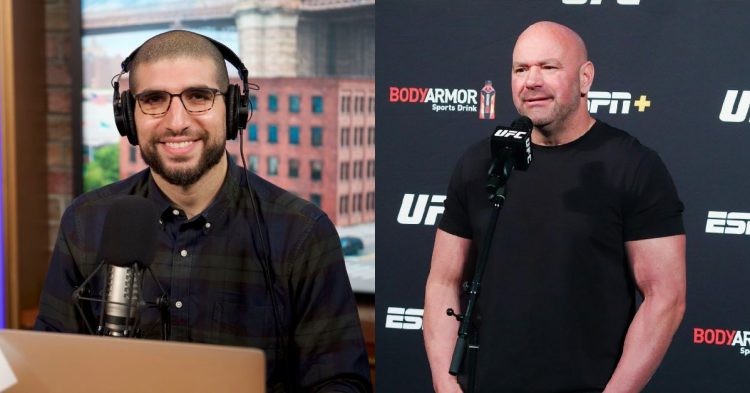 One of the most renowned MMA journalist Ariel Helwani was recently thrashed by UFC President Dana White and UFC lightweight fighter Paddy Pimblett. The duo did a podcast in which they had a lot to say about Ariel Helwani. They openly made comments about his work and his life. They targeted his previous work experience and said that he uses fighters to fill his own pockets. Now Ariel Helwani, just one day after the incident, has only talked about that podcast between White and Pimblett. He has responded to all the comments that were made to him. Ariel Helwani has also talked about Dana White’s role in firing him from ESPN.

Ahead of the UFC 282 event, UFC president Dana White went on the podcast hosted by Paddy Pimblett. While talking about several topics on the podcast, the duo decided to take shots at Ariel Helwani. According to them, Helwani is a biased journalist. They felt that he doesn’t promote the sports in the right manner. They also accused him of calling fighters on his show in the name of fake exposure. Pimblett said that he should start paying fighters who show up in his interviews and broadcast shows. Paddy Pimblett said that Helwani makes money off fighters and doesn’t give them enough credit.

Now Ariel Helwani had enough of all those statements made by White and Pimblett, so he decided to respond to them all. He also talked about how UFC President Dana White has hated him since the beginning and has always tried to get him off from covering the sport. He also said that people like Dana White and Ali Abdelaziz got issues with him just because they can’t control him.

“When I got hired by ESPN when I signed before the public knew about it he knew about it I signed with them in early April of 2018. He found out in around early May and he freaked out he freaked out he went all the way to the top of the company and tried to get them to renege on the deal that’s the kind of person that he is trying to get them to end the deal before it started.”

Helwani has been a part of MMA sports for a long time now. He has also been part of several controversies. Many feel that he does not promote the fights and fighters properly. Though many also like him as a journalist as he helps young talent to get the spotlight in sports. He has always got fighters to do interviews with him and lets both sides of the story come out.

It will be interesting to see how Dana White responds to the statements made by Helwani. Dana White is also known for fiercely coming out and responding to anyone, so if he does that he might clear out his death of the story on why he wanted to get rid of Ariel Helwani so badly.