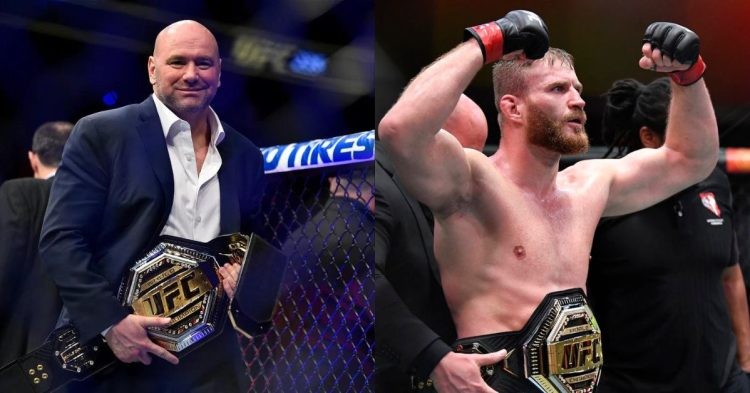 Ahead of the highly anticipated UFC 282 card, the promotion wrapped up its first press conference for the event. During the fighter’s faceoff, the fans noticed something different. It seems like the title used by Dana White for the faceoff between Jan Blachowicz and Magomed Ankalaev was a replica of the real belt. The duo is set to fight for the vacant UFC light-heavyweight title at UFC 282.

When UFC President Dana White got both fighters to face off, the fan’s attention got caught on something else. They realized that the UFC was using a replica of the real light-heavyweight title. The actual main event for the card was the first title definition of Jiri Prochazka against the guy he took the belt from, Glover Teixeira. But Jiri had unfortunately suffered a shoulder injury, and he then vacated the title.

Now we know it’s a PR belt. A new winner gets to take it home. from ufc

Maybe the UFC wasn’t prepared for that, so they didn’t have a title ready for this new main event. But even if the previous fight wouldn’t be canceled, the UFC still brings a new belt every time for a title fight. The real reason behind this mishap is still not clear. But let’s hope that till the fight takes place on Saturday night, they get a real belt for the winner.

Dana White reveals the next fight for Glover Teixeira

UFC President Dana White revealed that the winner of the UFC 282 main event will fight the former champion, Glover Teixeira, next. Glover defeated then-champion Jan Blachowicz to become the light-heavyweight champion. In his first title defense, he lost the belt to Jiri Prochazka. The duo went to war in that fight, but Jiri came out victorious as he submitted Glover in the last round.

The duo was set to rematch at UFC 282. But due to an unfortunate injury, Jiri had to pull out. Glover Teixeira was offered to Magomed or Jan. But Teixeira could not agree with the promotion.

The promotion then decided to convert the co-main event fight between Jan Blachowicz and Magomed Ankalaev into the main event. Later, it was announced that the winner of that fight will become the champion as the belt was vacated by Jiri.

Now Dana White has stated that Glover will get his chance to fight for the title next. The winner between Blachowicz and Ankalaev will make his first title defense against Glover.

The fight between Jan Blachowicz and Magomed Ankalaev will be an intriguing battle. Both fighters are equally matched on the feet with Jan having the edge. But it is the grappling of Magomed which will decide the outcome of this fight.

The fans now will be hoping that the winner of this fight will get to go home with the original UFC belt and not with the PR belt that they had during the pre-fight press conference.