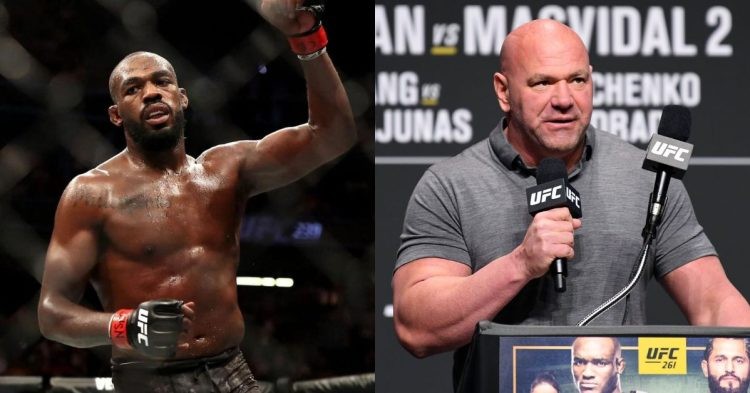 One of the most anticipated comebacks in UFC history seems to have been delayed a bit further again. Back in 2020, Jon Jones decided to relinquish his light heavyweight title and declared his move up to Heavyweight. It’s been more than two years and we still haven’t seen Jones step inside the octagon.

Jones’ last fight was against ‘The Devastator’ Dominic Reys at UFC 247 back in February 2020. Although Jones successfully won a world title fight for the 14th time, he arguably found himself in the toughest test of his entire career and looked like a shadow of his previous self. A few weeks ago Jones hinted at a return against former heavyweight champion Stipe Miocic at UFC 282 which will take place on December 10th in Las Vegas.

However, in a recent interview with ‘The Mac Life’, UFC president Dana White ruled out any possibility of Jon Jones returning to fight this year. White said, “I’m hoping that we get him (Jones) early next year or, you know, in the spring”. Dana White had previously named two possible opponents for Jones’ debut at heavyweight, “Jon Jones is ready to go. We’re just waiting for an opponent. It’s either gonna be Francis, depending on how long his knee is gonna take to recover or Stipe Miocic.” Considering the recent situation, it seems like Jones still isn’t ready to go.

Current UFC heavyweight champion Francis Ngannou is out of action after undergoing surgery to repair the ACL and MCL in his right knee that he injured in March before his title unification bout against Ciryl Gane and is unlikely to step inside the cage before the second quarter of 2023. Although, it isn’t confirmed whether Ngannou’s negotiations with the UFC are settled or not, as he has previously talked about banking a big payday to fight Jones at the start of 2023.

UFC looks keen on booking a fight between the light heavyweight GOAT, and the current heavyweight king as the anticipation for the showdown builds up further. So, is the UFC deliberately delaying Jones’ return to book a fight against Ngannou? Time will tell. But as of now, Ngannou is recovering from an injury, Miocic is waiting for a rematch against Ngannou and Jones is just looking for a fight.