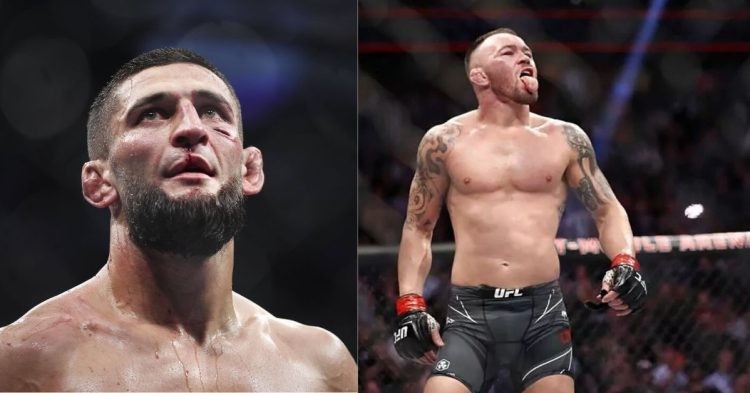 Khamzat Chimaev has been making waves in the media ever since his arrival at the UFC. Most recently, Chimaev missed weight for his main event fight against Nate Diaz at UFC 279. Thus, fans and even Khamzat himself believed that his future lies in the 185 lb division.

Following a dominant victory over Kevin Holland, Khamzat teased a potential move up to 185. However, experts have advised Khamzat to bag the 170 lbs title before moving up to middleweight. Since then, there has been a lot of silence from Chimaev and his team.

In a recent interview ahead of UFC 280, Dana White revealed what the promotion has in mind for Borz. Responding to a potential Khamzat vs. Colby fight in the co-main of the Kamaru-Leon trilogy, Dana gives his take. ” I agree with you. Alright, I’m on it, I’ll get it done,” said the UFC President, with no hesitation whatsoever.

Interestingly, this isn’t the first time White wanted to book Covington against Chimaev. Following Chimaev’s victory against Gilbert Burns at UFC 273, there were rumors that the UFC was looking to match up Chimaev and Covington. Unfortunately, the fight did not materialize, and Chimaev was booked to fight Diaz instead.

Currently ranked No.3 in the Welterweight rankings, the decision has seen some interesting responses. For the most part, many believe that Colby Covington is the man to stop Chimaev’s hype train at 170, with the American renowned for his durability and gas tank.

Is fighting Colby the right decision for Khamzat Chimaev?

Many stated that Khamzat‘s inability to make 170lbs is a problem and he should target 185lbs instead. On the other hand, fans felt that he is a big guy and has to nearly kill himself every time to make weight. As such, cutting weight is seemingly a big problem for Chimaev and it is not a bother for him to make 185lbs instead.

Previously, there has been a lot of back and forth between Chimaev and Paulo Costa. It all began due to Costa’s comments on Khamzat calling him a ‘gourmet Chechen’. Since then, Costa has been relentless on social media, calling for a fight against Chimaev.

But with Costa booked to fight Robert Whittaker at UFC 284, Covington is the only worthwhile opponent left for Chimaev. With Usman-Leon 3 also on the same night, it could very well open up Chimaev’s path to the 170 lbs strap. Do you think Khamzat beats Colby? Will he be the champ next year? Leave your thoughts in the comments below.