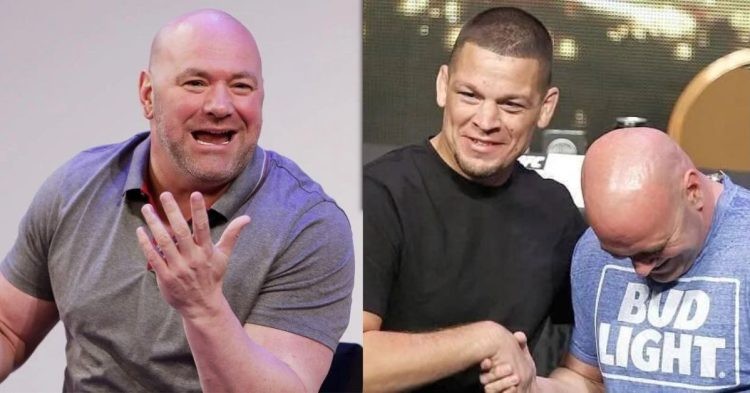 Dana White is a major figure in the sport of MMA. He has played a massive role in transcending the sport. The reason behind his success is the sheer passion he possesses for MMA. He loves combat sports in and out and that is evident when one sees him talk about fights.

Recently, there has been a bit of a tussle between Dana White and Nate Diaz. The dispute was regarding getting Nate Diaz a fight that he wanted at a specific time and UFC failed to oblige his desire. However, tensions seemed to calm down when the fight was Nate’s fight was booked against Khamzat at UFC 279.

That being said, Diaz had recently launched his own MMA promotion. Which raised questions in the sport about how White would react. This was asked about his response to Diaz commencing a new promotion.

When asked about Diaz’s approaching free agency at a DWCS 53 post-fight news conference on Tuesday, the UFC president, Dana White didn’t appear to be in a panic. In the interview, he stated, “At the times, at certain times, it was whatever, but looking back, the Diaz Brothers have been an absolute blast. They’re legends in this sport. If he wants to fight at another promotion or wishes to have his own promotion, If that’s what Nate wants, then, yeah, we wish him the best.”

White added that although there were some difficulties along the line with his promotion, he still loved having the Diaz Brothers.

Diaz is very well-known in the MMA world. He is referred to as the “OG”. He is a triathlete from Stockton, California who loves to practise Gracie Jiu-Jitsu apart from being a huge fighting figure.

Recently, A new MMA league was recently established by Nate Diaz. It is anticipated that Diaz’s new promotion will encourage boxing and Brazilian jiu-jitsu competitions in the league in addition to mixed martial arts.The organisation goes by the name of “Real Fight Inc“ and the tagline for the organisation is  “Real Ninjas. Real Fighters. Real S***.”

The future of Real Fight, Inc. as a regular event organiser or a venue for jointly promoting Nate Diaz matches is still in question. Diaz will have more negotiation power and marketing potential as a member of a fight promoter than he would as a lone fighter. However, it is an exciting turn of events. One sit back and see how the cards unfold.