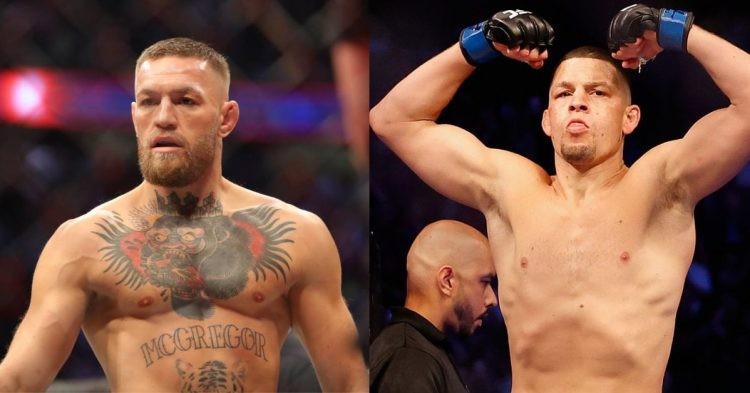 It’s very likely that Nate Diaz will enter the UFC octagon for the final time at UFC 279 against Khamzat Chimaev. Despite any title win, Nate Diaz has a legendary resume. He has beaten multiple former champions including the biggest name in the world of combat sports, Conor McGregor.

It’s needless to say that Nate Diaz has done a lot for the sport and UFC. And that is why many fans did not like UFC booking his last fight against Khamzat Chimaev, who is one of the most vicious welterweights in the world right now.

Former UFC fighter, Dan Hardy even called this fight an “assassination attempt”. He claimed that Dana White is trying to punish Nate Diaz for speaking against the company.

Dana White does not seem to have any bad intentions toward Nate Diaz. In fact, he is appreciative of Diaz’s accomplishments in UFC. In the post-fight press conference of Dana White’s Contender Series, White talked about Nate Diaz and his upcoming fight against Khamzat Chimaev.

Dana White stated that he cares about Nate a lot and he does not want to stop him from doing what he wants to do outside of UFC. Diaz has already teased fighting Jake Paul in a boxing match and White has said before that Diaz should go for that fight.

“I care about Nate a lot. I like Nate, and Nate came in here, long before that fight was ever made, and we were talking about it being his last fight, and I said, ‘Listen, kid. You think about the wars that Nate Diaz has put on and the incredible fights and the big fights that he’s done with us, go do whatever you want to do, man.’ “

Dana White on Diaz vs McGregor 3

Nate Diaz leaving UFC also means that fans will not be able to see him against Conor McGregor in one of the most anticipated fights of all time. However, Dana White does not have any regrets that he won’t be able to watch the third fight between McGregor and Diaz.

White believes that he has seen enough of McGregor vs Diaz in the first two fights. White certainly tried to book McGregor vs Diaz 3 before going with Diaz vs Chimaev. However, McGregor was still recovering from his leg injury, which is why the fight did not come to fruition.

“No, it’s not like, ‘Oh God, I never got the chance to make No. 3. The first two were awesome. That first round with Conor and Nate in the first fight was insane. Conor was landing these crazy bombs, then Diaz comes out in that second round. It was madness, and then the second fight was awesome. If it happens, it happens, but we got enough out of the first two.” White said.

Nate Diaz made his UFC debut back in 2007 by winning the Ultimate Fighter season 5. And if he decides to call it quits after UFC 279 then fans will certainly see him in the UFC Hall of Fame sooner or later.