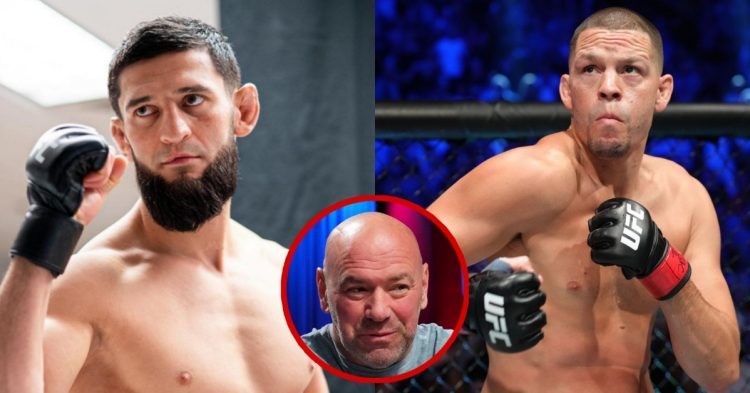 With UFC 279 in the rear-view mirror, it is safe to say that it had one of the most bizarre build-ups to it. Originally, the main event was supposed to feature Khamzat Chimaev and Nate Diaz. In the co-main, Tony Ferguson was set to fight Li Jingliang. However, in one of the worst weigh-in attempts, Khamzat missed weight by 7.5lbs.

It led to the UFC doing a lot of last-minute shuffling and coming up with some solutions. Ultimately, the UFC decided to put Khamzat against Kevin Holland who was also scheduled for a fight on the main card. Nate, on the other hand, got a favourable fight against Tony Ferguson.

Although Nate won the bout against Ferguson via submission, it was Khamzat’s dominance over Kevin Holland that sent shivers down the fans’ spines. Chimaev rag-dolled Holland and submitted him as if he was an amateur. Kevin is a BJJ black belt but it was irrelevant infront of Chimaev. It even led to Khamzat’s coach calling Holland’s black belt “fake.”

Recently, UFC President Dana White spoke on Khamzat Chimaev’s scary performance at UFC 279. He also commented on the original headlining fight between Diaz and Chimaev. Fans initially called the fight a nightmare match-up for Nate. But White dismissed those claims by saying the 37-year-old was capable of handling Chimaev.

But it looks like he has changed his tune after witnessing Khamzat’s performance. In a recent interview with ‘The Action Junkeez Podcast,‘ White expressed his amazement for The Borz.

“After you watch the fight, you realize Khamzat vs. Nate Diaz would have been f*cking – that wouldn’t have been good, Khamzat, I know the fans got pissed at him for not making weight and everything else, but Jesus f*cking Christ. What he went out and did to Kevin Holland – did you see Kevin Holland post the picture the other day that his eyes were all red from the f*cking choke? I mean, holy sh*t.” (h/t via MMA Junkie)

Khamzat Chimaev was not a happy man despite destroying Kevin Holland in the co-main of UFC 279. He was seen huffing and puffing backstage during the main event fight. After Nate won, Chimaev was quite angry and stated that he would have killed him if they fought. His anger was understandable as he lost out on headlining his first UFC PPV.

But it looks like his days of cutting weight are over! Chimaev’s coach, Andreas Michael, previously eluded that he will fight at middleweight next. Khamzat has now confirmed it himself with a recent tweet. Michael revealed that the 28-year-old was shaking and vomiting the night before the weigh-in ceremony. Hence, the move to 185lbs will eliminate the burden of weight cutting.

Although there is no official opponent for Chimaev at this point, Paulo Costa seems like a possible option. They already have a lot of bad blood between them and the bout is to be amazing!