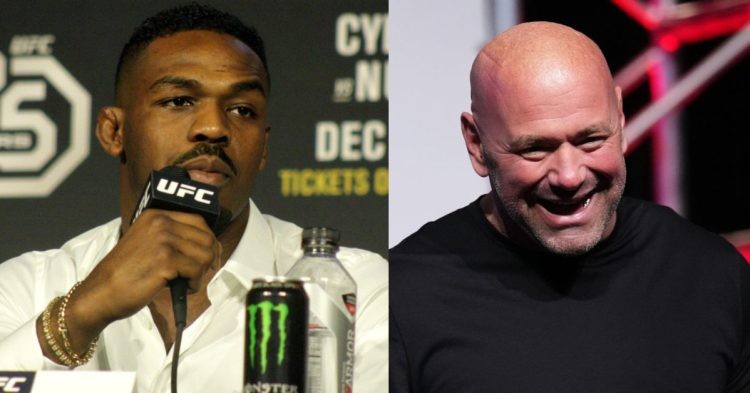 Jon Jones and Dana White have had a mixed relationship filled with highs and lows over the years where they have been critical of each other. The former light heavyweight champion also demanded a higher fight purse as the UFC is earning a significant amount of profits.

However, Dana rejected Jones’ demands and asked him to bring in good PPV numbers before asking for a higher fight purse. Interestingly, despite the rocky relationship between the former UFC champion and Dana, Jon Jones once came to the support of the UFC President in one of the interviews where he was questioned as to why UFC fighters don’t earn as much as boxers.

Bones explained how Dana White has helped numerous fighters earn millions and also revealed that he has become a multi-millionaire after his sixth title defense.

“The biggest difference between boxing and MMA when it comes to the pay rate I will have to say is boxing you know you got about five guys maybe ten at the most who are making millions of dollars. Where everyone else I would at least imagine is making $50,000 a year.”

“So I think Dana White over the last 15 years or something has created something like 40 millionaires that’s where I can confidently say that boxing hasn’t done.”

Apart from a few superstars like Conor McGregor and Israel Adesanya, there aren’t many fighters who are pulling in the audiences and grabbing PPV buys. Former UFC champion Jon Jones reveals what up-and-coming fighters in the promotion will have to do if they want to earn a big paycheque and become millionaires.

Jones said that in order to receive millions one would have to win several big fights in an extremely dominant fashion and prove their worth. He explained why Floyd Mayweather is so successful and is one of the biggest earning fighters and revealed that the UFC pays big bucks to fighters who have been undefeated and gave an example of his own growth.

There are many promising young fighters like Khamzat Chimaev, Bo Nickal, Sean O’Malley and many others who have the potential to bring in high PPV views of the promotion and earn millions in the future.