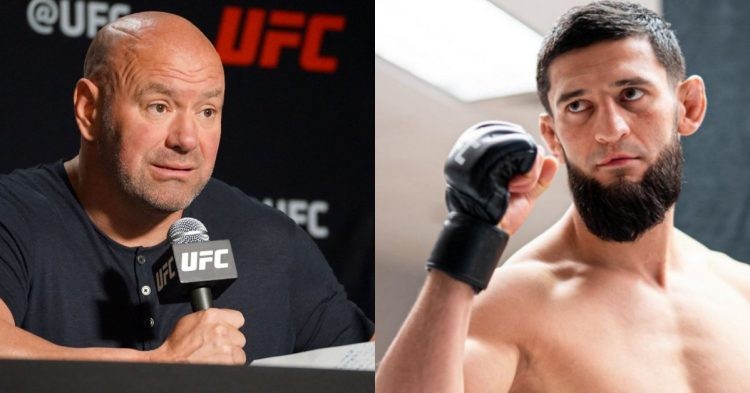 There is a lot of speculation regarding Khamzat Chimaev and his future in the UFC. He missed weight by 7.5lbs for his welterweight fight against Nate Diaz at UFC 279. It raised a lot of questions about whether Chiamev can safely make the cut to welterweight or not. Even Dana White is unsure what the future holds for the Swedish fighter in the UFC.

While some think Chimaev can safely make 170lbs as he has done so 3 times in his UFC run so far. However, there are those who think The Borz should not put his health at risk and make the move to middleweight on a permanent basis. It looks like the UFC matchmakers are also in the same conundrum and they are divided into two camps. Dana shed some light on the inner works of the UFC.

“There’s obviously the 170 and the 185lbs, there was a big beef today at matchmaking whether he can make 170lbs, whether we should even let him make 170lbs again and you know those are all the things that we’re kicking around right now.”

The 52-year-old is a big fan of Khamzat Chimaev. It looks like he is very hands-on about which opponent Chimaev faces next. Once asked about which side of the argument he falls on. However, Dana is not picking a side. Instead, he wants to leave it to the 28-year-old to decide what he wants to do going forward.

Although Dana White is not sure about where Khamzat will fight next, it does not look like Chimaev has any doubts regarding his future at all! In a recent tweet, Chimaev seems to have confirmed that he is indeed moving up in weight. It looks as if he does not want to put his body through the pains and trouble of cutting weight.

His head coach Andreas Michael revealed that Khamzat hates the weight-cutting process. Chimaev just wants to eat healthily and fight, but fighting at welterweight means that Chimaev has to compromise his body in order to fight in the weight class. Hence, Andreas wants to see his fighter compete at 185lbs next.

So it remains to be seen where Khamzat Chimaev fights next. Although the path to the title is much easier at welterweight, the weight cut is much harder. On the other hand, the path to the belt at 185lbs, the path is a bit longer. However, Khamzat will be able to perform at his best. There are rumours of him fighting Paulo Costa next. So what does the future holds for Khamzat? Only time will tell.