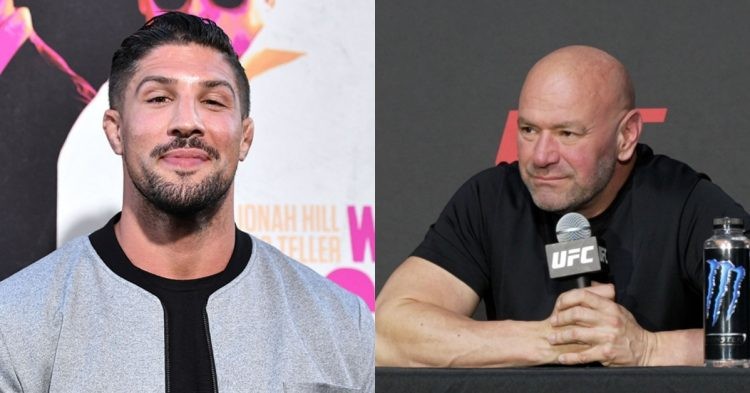 It looks like the rivalry between Dana White and Brendan Schaub is stirring up once again! Recently, Dana had some harsh comments about Brendan and his statements on the allegedly inflated numbers for the UFC 279 PPV.

Never the one to mince his words, the UFC President tore apart the comedian. Dana’s initial comments were on the former UFC Welterweight champ Pat Miletich, as he thought Miletich was the one to suggest that Khamzat Chimaev‘s weight miss was pre-planned. But once Dana came to know that the comments were made by Brendan, he just smiled and added, “that makes sense.”

Although Schaub is a successful comedian and a podcaster at the moment, he was a fighter in the UFC heavyweight division. Since his fighting days, Dana and Schaub never got along. Although things were cool between the two for a long period of time, Dana’s comments certainly have reignited the rivalry.

The 39-year-old shredded Dana to bits! From calling him a “low budget Vince McMahon” to accusing him of being on steroids, Brendan did not pull his punches. But the most significant portion of his post was him slamming the deal between the UFC and The Rock.

“Now go make a “cool” video with the Nelk boys to stay relevant or have your PR team come up with a good press story to distract the fans away from fighter pay and how they have to wear those awful under armor Rock shoes and won’t see a dime.” (h/t via @brendanschaub. Read his full comments here.)

There were reports recently that the fighters are not making a single penny from the deal UFC has in place with Dwayne Johnson’s company, ‘Project Rock.’ The report stated that despite not seeing any revenue from the deal, the fighters had to promote the brand regardless. Brandan Schaub was referring to that in his Instagram post.

In 2018, the rivalry between Dana White and Brendan Schaub was at its peak point. After a long back and forth, the former fighter dropped a bomb and called Dana his “Eskimo brother.” He threatened to expose White after the 52-year-old stated that Joe Rogan was the main reason behind Schaub’s success.

One might wonder what the term ‘Eskimo Brother’ means. Two men, who have had a sexual relationship with the same woman, are Eskimo Brothers. The rumours are that both Dana and Brendan have been involved with former UFC women’s bantamweight champ Ronda Rousey. However, Dana stopped replying to Schaub once this specific comment was made.

What are your thoughts on the matter? Do you agree with Brendan Schaub’s comments? If you don’t, do you think Dana White should fire back? Let us know in the comments down below!