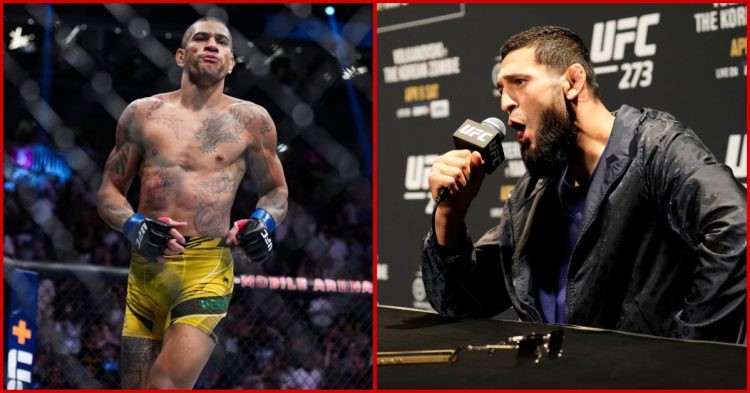 The fans have not seen Khamzat Chimaev in action since his instant classic against Gilbert Burns at UFC 273. Although he has been linked with Colby Covington and Nate Diaz in the past, nothing has transpired so far. However, it seems like Chimaev is ready to come back and he is targetting Alex Pereira.

Alex Pereira earned the biggest victory of his MMA career at UFC 276. Although he was going up against Sean Strickland who had more all-around skills, Pereira knocked Strickland out with brute force. With this win, he becomes the next fighter in line to face the middleweight champion Israel Adesanya. But it looks like Khamzat Chimaev is gunning for the fight to avenge his training partner Strickland.

The Borz already has a history of fighting at middleweight. His UFC debut against John Phillips came at 185lbs. But he focused all of the energy at 170lbs shortly afterwards. Khamzat is currently ranked 3rd in the UFC welterweight division. However, he wants to move up to middleweight once again for his next bout. Taking to Twitter, he wrote,

I’m want to fight with this guy @ufc @danawhite let’s make it 👊🏼💥 https://t.co/ao2fKbLCqq

Is Khamzat Chimaev vs Alex Pereira a possibility after UFC 276?

Khamzat Chimaev is in a very unique position in the UFC. Despite being relatively new, he is only one more fight away from fighting the welterweight champion Kamaru Usman for the belt. He can very well replicate the same situation at middleweight as well. Although the possibility remains slim, if the UFC does book him against Alex Pereira, he will become the no. 1 contender for the 185lbs belt.

The 28-year-old has the ideal body to compete at both welterweight and middleweight. Hence, he will not be outsized against Pereira. However, he will have to be extremely careful about his striking defence. As Sean Strickland found out the hard way, if the defence is not up to the mark, Pereira will knock out his opponents because of his immense power.

However, Khamzat will have an undeniable advantage on the mat. Chimaev has some of the best wrestling in the entire UFC roster right now. He even took Gilbert Burns down without a problem in his last fight. Hence, using his grappling will be very useful against a dangerous striker like Alex Pereira.

But the question is, will Alex Pereira vs Khamzat Chimaev happen in the immediate future? Pereria has the opportunity to fight his old kickboxing rival Israel Adesanya for the middleweight championship next. Hence, it is hard to see him passing up such a chance just to fight Khamzat Chimaev. But, they may cross paths in the future under different circumstances.