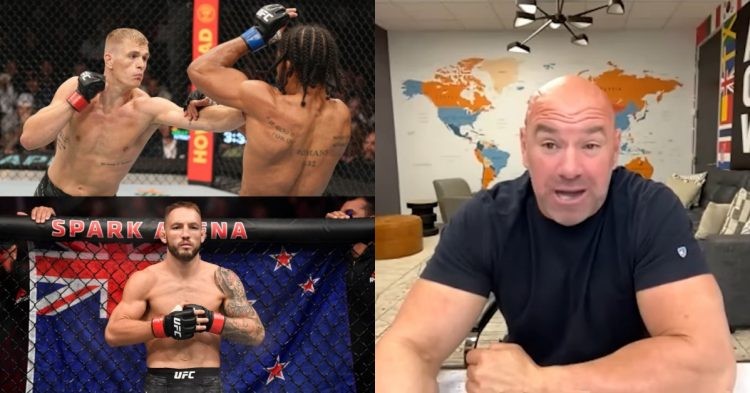 UFC 276 has perhaps the most stacked card of the year. From champions such as Israel Adesanya and Alexander Volkanovski to superstars such as Max Holloway and Sean O’Malley, the event features all the biggest stars of the sport on the main card. But the UFC president Dana White has high expectations from the preliminary card as well.

The preliminary card for the international fight week event will be a showcase for the young up-and-comers in the UFC. Although it features the rematch between Jim Miller vs Donald Cerrone, the card is set to feature an exciting lightweight prospect, Brad Riddell. Ian Garry, who is touted as the next Conor McGregor, will also compete on the card.

It will be a monumental opportunity for the youngsters as the prelims will be live-streamed all across the ESPN outlets. But more than that, the preliminary card will be live on the ABC network as well, ABC is one of the biggest TV networks in America. Hence, the young fighters will have the opportunity of a lifetime performing in front of such a massive audience and Dana White wants them to take advantage of it.

In a recent interview with Kevin Iole on the Yahoo Sports YouTube channel, the 52-year-old stated that youngsters should pour out everything that they have and make an impression on the audience. He said,

“The great thing about this card… this thing is is simulcast on ABC, ESPN and ESPN+. The viewership that these kids are gonna get this weekend, is next level.”

As big as the UFC has gotten or as large as the sport of MMA has become, It still has a long way to go. Although the world is rapidly moving toward OTT platforms, there is still a lot of value in cable TV. Hence, the UFC fights being broadcasted on ESPN channels and the ABC network is a big deal for the promotion.

During the interview, Dana White pointed out the lack of watchable programming on network television. Hence, he fully expects the preliminary card to attract a huge audience. Hence, putting up good performances on live TV will only boost the brand value of fresh fighters. So prospects like Ian Garry and Brad Riddell will have a great exposure on Saturday.

Fans will be able to watch the prelims July 2 from 8-10 PM ET on @ABCNetwork, @ESPN, @ESPNDeportes and @ESPNPlus pic.twitter.com/Jlg3AWHhTd

UFC is slowly moving away from the days of Conor McGregor, Ronda Rousey and Jon Jones as their big stars. The company has new faces such as Israel Adesanya, Kamaru Usman and Alexander Volkanovski on the billboards. It opens up opportunities for the next generation to rise to the occasion and grab the attention of the audience. Hence, expanding the territory will allow the company to build more stars.