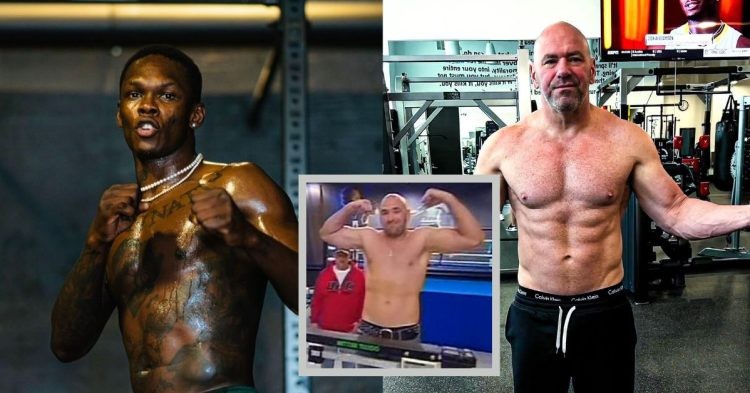 Dana White agrees with Israel Adesanya that fighting is in our DNA (Credit: Twitter)

UFC Middleweight champion Israel Adesanya (23-1) is set to return to the octagon to defend his title against his kickboxing nemesis Alex Pereira (6-1) at UFC 281. Adesanya is undefeated in his weight class and has almost cleared out the division.

But he is yet to face the only man who defeated him twice in kickboxing. This time Adesanya will put an end to his rivalry with Pereira in the main event of UFC 281. Ahead of the highly-anticipated fight against Pereira, ‘The Last Stylebender’ opens up about his journey to becoming a UFC fighter.

Unlike the majority of the fighters, Adesanya did not want to be a fighter. But once he had his first fight, he realized that he can be great at it. He said: “No matter what you do, Dana says that the best like it’s in our DNA.

That’s how you have basketball, football, and even hockey on that side. If a fight breaks out on that corner, everybody stops what they were doing and just like – ‘oh sh**. Are they going at it?’ ‘Cause, it’s in our DNA. We all wanna see a fight.”

UFC President Dana White agrees with Adesanya on this. White himself wanted to be a fighter. He was so focused on becoming a professional boxer, that he quit his job. However, he realized that he will never be a fighter, and so he gave up on that dream.

Why did Dana White give up on his dream of becoming a boxer?

Dana White is one of the most famous people in the world right now and the President of the biggest MMA promotion in the world. But originally he wanted to be a professional boxer. He is still in love with the sport even to this day.

White often trains, keeps up with the sport regularly, and watches all big PPV boxing events. Before he became the president of the UFC, he had hoped on becoming a fighter in Boston. Later, he abandoned that dream once he realised he will never make it as a boxer.

White’s obsession with the sport did not let him quit. He gave up on his dream of becoming a boxer, but he stayed in the fight business. Dana started running his own gyms and then started managing fighters. This is how the UFC reached its height today under White.

When did Israel Adesanya start fighting?

Israel Adesanya started his fighting career with kickboxing. He had his first fight when he was 18 years old and amassed an overall record of 75-5. After gaining huge popularity in kickboxing, he turned to MMA.

The UFC middleweight champ also tried his luck in boxing. He holds a record of 5-1 in boxing. Adesanya made his UFC debut with a knockout win over Rob Wilkinson at UFC 221. His spectacular performances and flashy striking style made him a fan favorite very quickly.

In the same interview, Adesanya explained how he turned out to become a professional fighter. He said: “I never wanted to be a fighter… Actually, I wanted to be a WWE superstar, that’s what me and my family grew up watching.

According to Adesanya, he never wanted to be a fighter. Instead, he dreamt of becoming a WWE superstar. His love for anime and Jackie Chan’s action movies drove him into trying his luck in fighting.

Additionally, Adesanya was a huge fan of Anderson Silva. When he saw how Silva, being a “skinny black dude” used his amazing fighting techniques to demolish the fighters, he started to believe that he could too. Adesanya takes on Pereira in the main event of UFC 281 on 13th November.