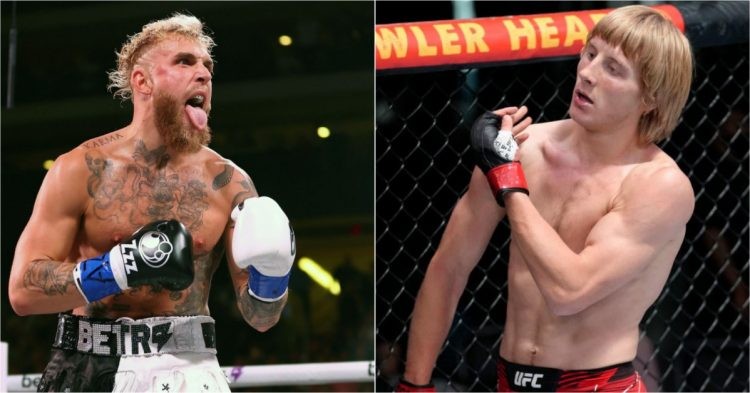 Jake Paul adds another UFC fighter to his potential hit list as he calls out Paddy Pimblett for a sparring session. The celebrity boxer beat UFC legend, Anderson Silva, in his last fight. It was undoubtedly one of the biggest upsets of the year as very few people gave Paul any chance of beating the veteran fighter. Although he managed to do so, it did not convince Paddy.

The UFC lightweight fighter recently appeared in an episode of Pub Talk. During that, he made a shocking claim about Jake’s fights. According to the UK superstar, Jake’s fights are “rigged.” Paul managed to knock Anderson Silva down in their fight. However, Pimblett does not think the particular punch, which sat Anderson down, even touched the former UFC middleweight champ.

Needless to say, Jake did not sit quietly amid Paddy’s allegations. The Problem Child took to Twitter and blasted Pimblett for his words. But, he did not stop there. He wanted to make a deal with Paddy. Jake offered to fly Paddy out to Puerto Rico and have a sparring contest, which would include five 3-minute rounds.

Dear Paddy Pimblett, you claim my fights are rigged? Stop calling the GOAT Anderson Silva a criminal and come spar me.

You win, I give you $1 million. I win, you join the UFA. pic.twitter.com/jOFqcPdjnz

Jake is prepared to give Paddy $1 million. Paul once again hinted towards UFC’s low fighter pay and promised a better purse than what UFC may offer him. However, if Jake manages to win, he wants Paddy to sign up for his United Fighters Association.

Paddy Pimblett reveals he will fight Jake Paul after UFC 282

Paddy Pimblett was recently interviewed by TMZ Sports. During their conversation, the interviewer asked the 27-year-old whether he wants to accept Jake’s offer or not. With a second of hesitation, Paddy accepted the offer. However, he added some terms of his own.

“I’m in Vegas (for my fight) on Thursday. I land on Thursday, so even though I’m low on calories and I’m only about 170 lbs, he likes picking on smaller people anyway. But, if he wants to wait until after me fighting until the Monday, because I’m still in Vegas till the Tuesday. When I’m about 185-190lbs, I’m game.”

Paddy The Baddy will fight Jared Gordon in the co-main event of UFC 282. Hence, Jake’s offer to spar ahead of the MMA fight does not make sense to Paddy. However, the Liverpool native is more than open to taking on the 25-year-old on his own time. He wants Jake to cut down to somewhere between 180lbs-190lbs. Paddy is not making it easy for Jake to run over him like his previous opponents.

However, the possibility of the sparring contest actually taking place is very low. Although Pimblett is more than open to fighting Jake Paul in a boxing match with UFC as a co-promoter, It is hard to imagine Dana White agreeing to it. Jake and Dana have had their differences previously. So White would not be keen on doing business with The Problem Child.

Hi Nate. Finally out of your UFC contract?

Let’s see how tough you are in the boxing ring instead of hallway slap contests.@NateDiaz209

I have a venue booked. Offer is ready when you are. Just need you to sign.

UFC recently removed Nate Diaz from its rankings. So it looks like Diaz is completely free of any obligations with the UFC. So Nate Diaz vs Jake Paul is a big possibility to kick off 2023.