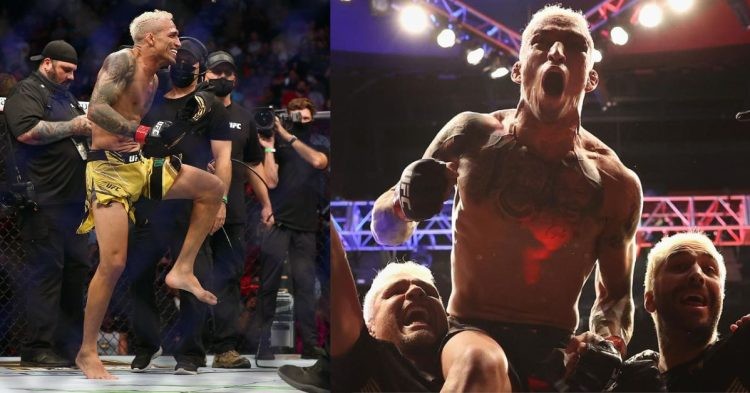 Charles Oliveira celebrates with his team after winning the title

Charles Oliveira looks to reclaim the lightweight belt against Islam Makhachev this weekend. The Brazilian will finally get the chance to earn the belt which he never lost in a fight. After conquering the title at UFC 280, ‘Do Bronx’ has revealed his celebration plans.

Recently, Oliveira told sports journalist Brett Okamoto that he is planning a huge celebration in the hotel after winning the main event fight. Oliveira said through his translator:

To this Brett sarcastically replied: “I hope for the hotel’s sake that it isn’t too bad.” Then Oliveira showed his concern and jokingly said: “Dana will pay for it right?”

This coming weekend on 22nd, October, ‘Do Bronx’ plans to reclaim what technically was his. Oliveira was stripped of his title in a controversial mishap when he missed weight before the win over Justin Gaethje.

For this, Oliveira is still considered by most fans as the real champion even though the belt is technically vacant. However, with his dominant win over Gaethje and other top lightweight contenders has earned him the title of the best lightweight of all time.

But he will face one of the best wrestlers in the division, Makhachev. The Russian is the protégé of former champion Khabib Nurmagomedov and will look to carry his mentor’s legacy. He has displayed his utter dominance in the octagon before, which looked very similar to Nurmagomedov’s style.

Going into this fight, Charles Oliveira has stated that he plans to knock out Islam Makhachev in the first round of their title bout in the main event of UFC 280, scheduled to take place in Abu Dhabi, U.A.E. on October 22nd.

The Brazilian will fight Makhachev in his backyard, as Islam will enjoy a huge fan base in the U.A.E. This place has always been the home turf for the Muslim fighters and Nurmagomedov in particular. At the UFC 280 open workout, Oliveira had to deal with some booing crowds.

Regardless, the Brazilian submission specialist has warned that he’ll beat Makhachev. When he was asked about his preparations for the UFC 280 fight, Oliveira stated:

“I’m a hundred percent. I was born for this. I was chosen. I’m enlightened. I know you guys may be rooting for him, but I’m gonna knock out Islam Makhachev in the first round.”

Since the announcement of this fight, there have been a lot of trash talks among both of the fighter camps. Nurmagomedov recently stated that Makhachev will “ride Oliveira like a horse.” ‘The Eagle’ also sidelined Oliveira’s ground skills and said “If you tap eight times in UFC, how can you say you have a ground game? You tapped eight times.”

On the other hand, Oliveira’s coaches, Diego Lima and Alireza Noei think otherwise. They said that Khabib’s influence is too heavy on Makhachev and after witnessing Oliveira’s improvement in wrestling, they are very confident in Oliveira’s skills.