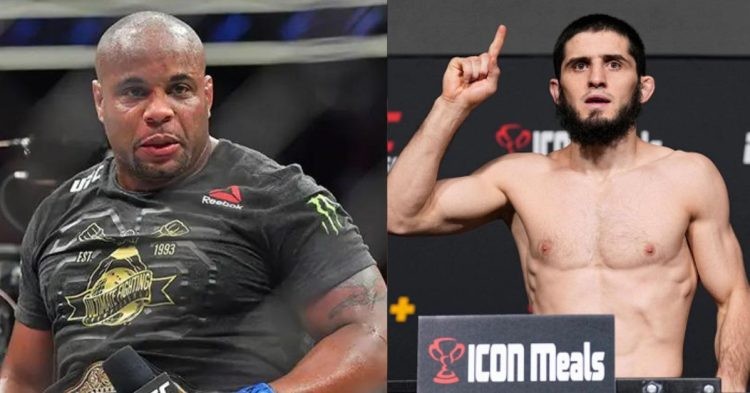 Cormier’s former teammate and one of the greatest fighters of all time, Khabib Nurmagomedov had made some bold predictions ahead of Islam Makhachev’s first shot at the UFC lightweight title against Charles Oliviera.

“I think Islam is more skilled than Oliviera” Khabib said in an interview with UFC, “of course, there are some potential dangers that we’re working on where Islam needs to be careful. Other than that, Islam should roll over him.” Khabib even went on to predict that Oliviera won’t show up for the fight, luckily that prediction didn’t materialize and Oliviera after much delay arrived at Abu Dhabi for the mega event.

Cormier in a recent video posted on his channel said “I know intimately, I know that in the camp Islam is focused on all that Charles brings and he recognizes that, very weary of that. Does that mean he’ll win the fight, I don’t know. I’m telling you right now this is the first time in a long time that I felt as unsure about a fight Islam is going into than I am for this one.”

How is Islam Makhachev preparing for Charles Oliviera?

The number four ranked UFC lightweight Islam Makhachev is deadly aware of the threats Oliviera possesses. Until now Makhachev’s career has been pretty smooth. Since that knockout loss to Adriano Martins, Khabib has racked up ten straight victories out of which six have been finishes. For this fight, Makhachev can be seen sharpening his grappling and wrestling skills as Oliviera is one of the most dangerous fighters when the fight goes to the ground.

In a recent video posted by Anatomy of a Fighter, Makhachev put a sparring partner to sleep during a grappling training session. Grappling has always been Makhachev’s strength, but one aspect of fighting he is not really known for is striking, and it looks like Makhachev is emphasizing enough on that department.

In various training videos shared by Makhachev, he can be seen working diligently on his striking, specifically kicks.

Oliviera is a submission artist but what makes him so dominant of late is his striking abilities. In fact Oliviera has a TKO victory against one of the best strikers in the division, Michael Chandler. While many believe Makhachev to be the better grappler, Oliviera has a clear upper hand in the striking department.