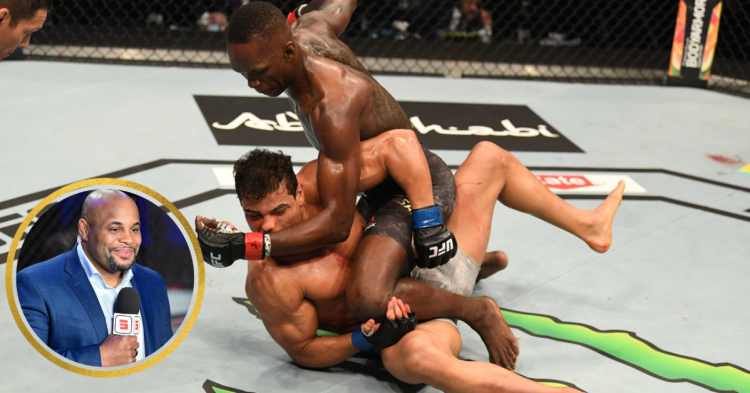 Israel Adesanya answered his critics with a brutal stoppage win over undefeated Paulo Costa in the main event of UFC 253. Israel Adesanya, who was criticized leading to his fight against Costa after his lackluster performance against Yoel Romero back at UFC 248, sent a notice to the entire division with win over Costa. In the process, Israel Adesanya became the first fighter to beat Paulo Costa inside the octagon. Man fights fans believed that Israel Adesanya’s technical striking would give him an edge over a lethal puncher like Paulo Costa. Adesanya did not only beat Costa, but it was the fashion in which he defended his Middleweight gold.

@stylebender is on another level!!!! This dude made it look easy. Congratulations king!!!! pic.twitter.com/gHK39Ytw01

Daniel Cormier reacted to the emphatic win, and congratulated the last Stylebender on defending the gold. Cormier stated that Adesanya made it look easy and rightfully so. Adesanya looked absolutely lethal, and stood by his words as he picked up the stoppage win.

👑 @Stylebender is the undefeated king of the middleweights.

Israel Adesanya looked composed and patient in the first round, working with just his kicks while managing to keep a good distance. Coming into the fight with a decisive reach advantage, Israel Adesanya kept his compsure, landing some lethal damage on the lead leg of Paulo Costa. Meanwhile, going into the first round, despite a slow start from Paulo Costa, even he looked more composed than usual. However, it was in the second round that Costa’s reluctance to pressure Adesanya started looking evident. With enough damage on the lead leg, Adesanya started to pick his shots and landed several leg kicks. Adesanya started pressuring Costa in the last minutes of the second round, landing a brutal head kick, followed by a quick jab, and a solid counter punch to send Costa down. Adesanya followed it up with brutal ground and pound to finish the fight. With the win, Israel Adesanya remains the undisputed Champion of the Middleweight division with two title defense to his name.

Also Read I Diego Sanchez Gets Punished at UFC 253

Israel Adesanya has not only answered his critics but his haters. The former kickboxing Champion is a serious threat at the Middleweight division and wants to continue to remain the undisputed Middleweight Champion along the lines of the greatest of all time Anderson Silva.