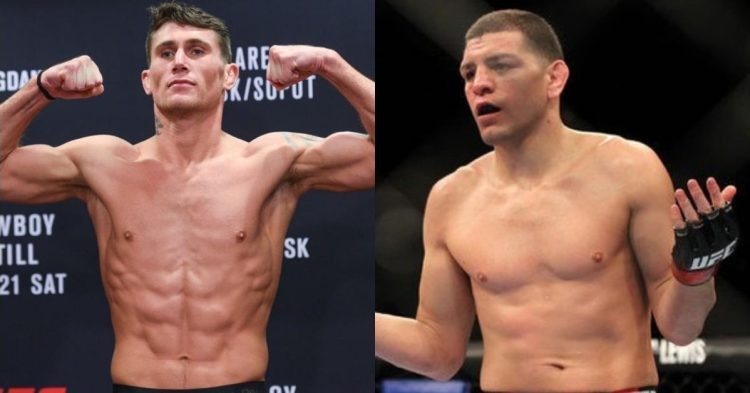 In a list that is likely to get longer, Darren Till joined Stephen Thompson and called out Nick Diaz for a scrap inside the octagon. Earlier today, the world went into a shock when Nick Diaz’s manager announced that the former Strikeforce Champion is looking at an early 2021 return to the octagon. Nick Diaz has been away from the octagon for well over five years now. While ring-rust is an important factor if and when he makes his UFC return, it’s definitely exciting to see the former title contender once again hail the UFC octagon.

Darren Till calls out Nick Diaz

Darren Till in a tweet captioned, “If @nickdiaz209 wants to come back & scrap, who’s the biggest star, fight & best fight for him outside the Middleweight champ.? F***ing me that’s who…”

If @nickdiaz209 wants to come back & scrap, who’s the biggest star, fight & best fight for him outside the Middleweight champ.? Fucking me that’s who… 🦍

According to Nick’s manager, the Stockton Slugger is looking at top Welterweight fights ahead of his UFC return. While it’s unlikely for Diaz to jump to Welterweight, it’s not a possibility that can be totally ignored. Be that as it may, there’s also a reason to believe that Darren Till could come to down to Welterweight if the fight between both the fighters does capitalize. As of now, Darren Till is expected to face Jack Hermansson next after losing a thrilling five-round battle against Robert Whittaker earlier this year.

Earlier, ESPN journalist Ariel Helwani broke the news that Nick Diaz would finally make his UFC return after being out of action for over five years. “He is keeping a close eye on the big welterweight fights coming up. He is “100%” planning on fighting again, per Mubenga, and is targeting an early 2021 return.”

Diaz was handed a five-year ban for a doping violation in connection with the consumption of marijuana. However, the sentence was later reduced. Regardless, Nick never showed any interest in returning to the octagon. The news has certainly taken many fights fans by surprise and rest assured everybody is waiting to see Nick Diaz hail the octagon once again.

Stephen Thompson Issues a Massive Call Out to Nick Diaz