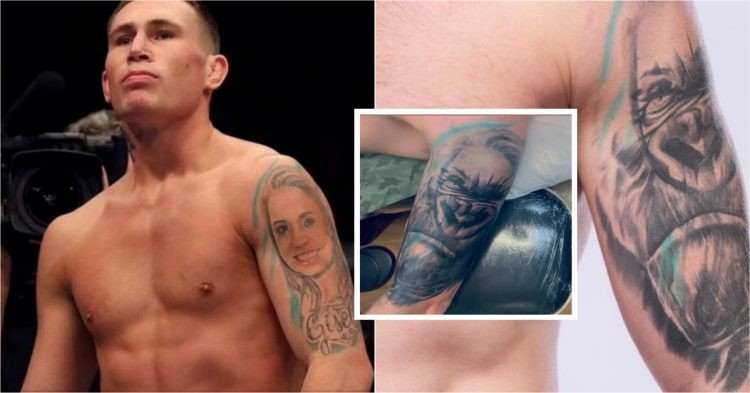 One of the most exciting talents from the UK, Darren Till will return to the Octagon at UFC 282. Till’s last few about fell through because of some bad injuries. However, Till seems healthy ahead of the big PPV event this weekend, where he fights South African MMA talent Dricus du Plessis. However, there is a noticeable change in Till ahead of his much-anticipated return.

Darren Till has one of the most famous tattoos in the entire UFC. On his left bicep, he had a big tattoo of his girlfriend. Apparently, it was a birthday gift for his ex-girlfriend. However, in recent pictures, fans can clearly see that the tattoo is being covered up by the Liverpool native. On top of his ex-girlfriend’s face, Till is getting a tattoo of a Gorilla.

Fans may wonder why is Till getting a tattoo of the animal on his bicep. It is clearly a nod to his nickname ‘The Gorilla.’ Before Till clarified that the tattoo was of his girlfriend’s, fans thought it was the former UFC female fighter Paige VanZant. But fans will no longer get to see the tattoo, as it is almost invisible because he is in the process of covering up the tattoo.

Who is Darren Till’s girlfriend?

Darren Till has three daughters with two separate women. Till, who is fluent in Portuguese language, spent a significant period of his career in Brazil. There, he had a daughter by the name of Scarlett Isabella Till. His other two daughters are with his reported fiance, named Cerrone. Till and Cerrone named their two daughters Zara Till and Raya Lilly Till.

Cerrone was the woman on Till’s left arm. Before his social media ban, Darren Till used to post photos of his girlfriend on his Instagram account. Although Till maintains a presence on Twitter and Facebook, Darren no longer has an account on Instagram. There are many pictures of the couple floating around on the internet, but there is no information on when they started dating.

However, there are questions about whether the couple has broken up or not. Although Till has a very flamboyant personality, he seldom speaks about his personal life and keeps his private life away from the spotlight. Until the 29-year-old breaks his silence and opens up about the tattoo, fans will have to wait for the story behind Till’s decision.

As previously mentioned, fans can witness Till in action on December 10th at UFC 282. Till suffered some bad losses against the likes of Robert Whittaker, Derek Brunson, and Jorge Masvidal. Till is currently ranked 10th in the middleweight division and beating the 14th-ranked Dricus du Plessis would get his career back on track.